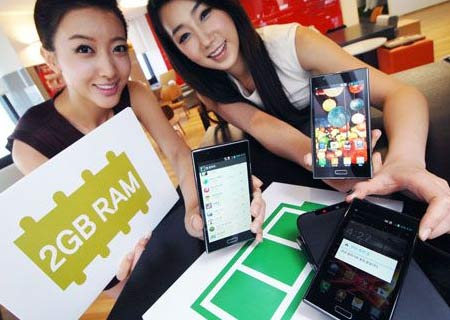 What makes the recently announced LG Optimus LTE 2 so special is the fact that it packs in a whopping 2GB of RAM muscle. Another attention-grabbing aspect of the device is the WPC capability which means that it can draw juice from a compatible charging pad, wirelessly. It delivers face unlock, resizable widgets, improved folder management and more owing to the Ice Cream Sandwich OS.

One of the main advantages that the phone has over its predecessor is the integrated 2150mAh battery that can apparently offer up to 40% more life. As for the 2GB RAM specification, it should allow for better multitasking as well as enhanced overall system stability. Power efficiency and reliability are undoubtedly two major elements that weigh heavily on the LTE user experience and LG appears to have kept this in mind while designing its new Optimus handset.

There’s no word on the CPU which will be embedded within the chassis and our guess on it being a quad core one is as good as anyone else’s. Even the exact dimensions of the smartphone haven’t been sketched out, though it looks pretty slim and sports a bar form factor. Again, we don’t know the precise size of the expansive touchscreen decorating the front panel, while True HD IPS is being thrown around in a vague description of the display.

The LG Optimus LTE 2 price hasn’t been given a clear mention as of now. But it is set to come out through a couple or more network operators in Korea, with the release date marked for sometime around mid-May.