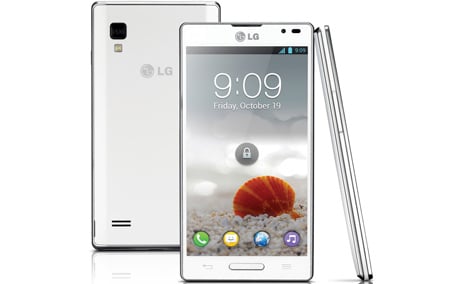 Taking to the ramp as yet another option in the L-series, the LG Optimus L9 has made an official appearance. It follows the Optimus L3, L5 and L7 which have already been launched in the market. Well, members in this lineup clearly do not think that even numbers are fashionable.

Though it can hardly be compared to the more recently introduced Optimus G, the handset still has enough to boast about on the specifications front. Rolled out across the face is a 4.7-inch IPS touchscreen as well as a VGA camera for hooking up with friends over video chat.

The phone runs on a sturdy combination of Ice Cream Sandwich, 1GB DDR2 RAM and a dual core processor clocked at 1GHz. The only mention about storage space comes in the form of 4GB eMMC memory and for photography needs, there’s a 5MP camera on the rear panel. Convenience features such as QMemo, QTranslator, My Style Keyboard and DLNA are also part of the mix.

“The Optimus L9 is a great smartphone that appeals to every consumer,” expressed Dr. Jongseok Park, President and CEO of LG Mobile, while talking about the smartphone’s debut. “LG will continue to offer differentiated value through the Optimus L9 and strengthen our position in the smartphone market.”

Like a few other LG devices, even this phone’s 2,150mAh capacity battery is supported by SiO+ technology which allows for extended usage time between charges. The aforementioned QTranslator can translate scanned text from a horde of languages owing to Optical Character Recognition (OCR) intelligence. All of this technology is packed into a form factor measuring almost 131.9mm x 68.2mm x 9.1mm and weighing nearly 125g.

As of now, there’s nothing specific on the LG Optimus L9 price and release date angle.