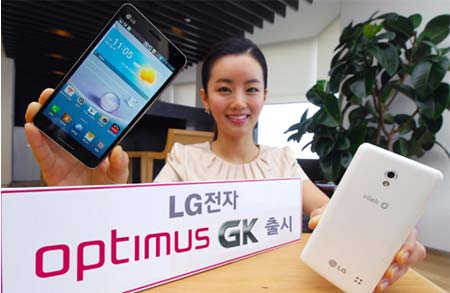 LG is continuing its rollout of new smartphones to rival Samsung’s massive market presence, and the Optimus GK is one more device that fits this bill. Remember the 5-inch G Pro which had entered Japan through NTT Docomo? Yes, this the very same phone which, for now, will only be dished out in Korea, exclusively by a carrier named KT. Its price details are still unclear.

Like we said, the handset embraces a 5-inch display which possesses the same IPS technology, equipped with the Zerogap Touch trait, that the G Pro houses. This full HD screen is able to proffer a pixel density of 440ppi. That being the only notable difference between the two, the other specifications remain the similar. The same 1.7GHz quad core Snapdragon 600 is responsible for running the operations of both the phones, while 2GB DDR2 RAM is also there for assistance.

Android version 4.1.2 Jelly Bean has been granted to the new device, and there’s no word right now about any future update. Camera options include a 13MP rear snapper as well as a 2.1MP front one. Measuring in at 139.1mm x 69.9mm x 9.9mm, the handset has its weight set at 156 grams. 16GB of internal memory makes its way into it, whereas there’s even a microSD card slot for expansions of up to 64GB.

The 4G LTE-enabled device comes with a range of connectivity options which comprise of Bluetooth 4.0, USB 2.0, Wi-Fi, NFC, SlimPort and more. And then there are the various exclusive features that the company has thrown into the mix as well. These include Dual Rec, VR Panorama, Smart Video and more.

Rumors about this phone’s existence had started making the rounds earlier this year, when it was being predicted that it will be shown at the MWC event in Barcelona. But it was not meant to be, as the company has chosen to unveil it way later than that. We’re not quite sure if and when it will be revealed for markets outside Korea.

News about the LG Optimus GK has landed just as its sibling, the G Pro, is set to hit the US. We’ll have more on these two when additional details are out.