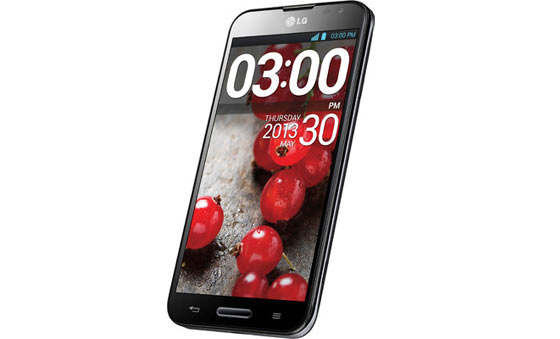 It was on the 4th of July that the LG Optimus G Pro hit India, bearing a maximum retail price of Rs 42,500, but the company-suggested tag doesn’t seem to be doing it for Flipkart, as it has already started offering it for as low as Rs 38,990. This price cut of Rs 3,510 is a significant one, seeing as it has only been two days since the LG device made its way into the country. Retailers other than Flipkart however, are still to start stocking the handset, and hence, they have stopped short of revealing the amount for which they will be selling it.

This flagship smartphone from the South Korean manufacturer boasts of advanced hardware components that are complemented by a number of unique software attributes which have been infused into it. The phone bears on its front a 5.5-inch full HD IPS display which grabs Gorilla Glass 2 protection. A Qualcomm Snapdragon 600 processor finds its way into the LG Optimus G Pro, offering the benefits of a 1.7GHz quad core CPU and an Adreno 320 GPU.

It even comprises of a 13MP rear camera – capable of full HD video recordings at 30fps – apart from a 2.1MP front snapper to facilitate video calling. Sized at 76.1mm x 150.2mm x9.4mm, it tips the scales at 174 grams. The Android v4.1.2 Jelly Bean OS has been chosen for the LG Optimus G Pro by its maker, strangely enough, not granting it the latest version of the OS.

16GB worth of internal storage has been entrusted to this handset, along with a microSD card slot for further expansions. Additionally a 2GB RAM also occupies space inside it. Software attributes that the LG Optimus G Pro grabs hold of include the QSlide 2.0 multitasking trait, Dual Recording for simultaneously capturing videos with the front and rear cameras, the familiar Quick Memo app for seamless creation of notes and more.

Those wishing to purchase the Optimus G Pro can head over to Flipkart now, and snap it up for a reduced price of Rs 38,990.