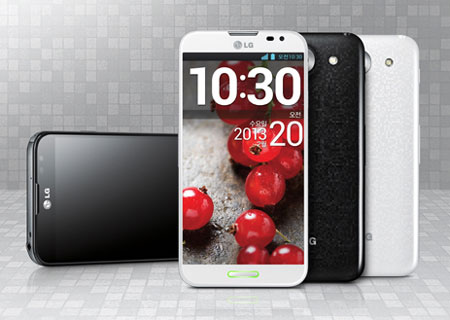 The LG Optimus G Pro release date has been announced for Korea and the handset with a 5.5-inch display and a 13MP camera will be made available sometime this week. It will be the first phone to use the quad core Qualcomm Snapdragon 600 CPU and most of its previously rumored specifications have now been confirmed.

The handset for the aforementioned region will have a full HD screen infused with IPS technology and a pixel density of 400ppi. For comparison, the Oppo Find 5 has a smaller 5-inch display but a 441ppi pixel density, whereas the iPhone 5 loses out on both counts with 4 inches of screen real estate bringing visuals at a 326ppi value.

The company claims that the 3,140mAh battery in the newly launched smartphone is the largest in its class, allowing user to view high-definition videos without worrying about power consumption. Also, the unit is capable of wireless charging. On the rear is a 13MP primary snapper which means that images and video can be captured in full HD. Earlier left in the dark, we now know that the front gets a 2.1MP webcam.

In terms of performance, the device has 2GB of RAM and 32GB of internal memory. The quad core processor we spoke of runs at a speed of 1.7GHz, while storage can, at most, be doubled using a microSD card with a capacity of 32GB. Of course, a high-end handset such as this will be based on the Android Jelly Bean (v4.1.2) platform.

And all that power comes in a fairly compact package, although it is still slightly thicker than Apple’s latest offering in the mobile space, measuring in at 9.4mm in thickness. After it was spied with a larger display, it then received a (semi) official reveal via Facebook, but still little was known about the handset. It has been revealed that the device will be on display at the MWC in about a week, as previously rumored.

A few features that have now been confirmed include some advanced user experience attributes such as dual recording and virtual reality panorama. The former allows video to be recorded simultaneously using both cameras with a picture-in-picture format, while the latter takes panorama viewing to a new level with horizontal as well as vertical panning, leading to a full 360-degree view. It also brings over a few UX enhancements from its predecessor including Live Zooming, QuickMemo and an advanced QSlide.

A price of 968,000 won for the G Pro has been announced in a separate Korean release. That comes to about $900. Speaking of which, the device is set to launch in overseas markets including North America and Japan in the second quarter of the year.