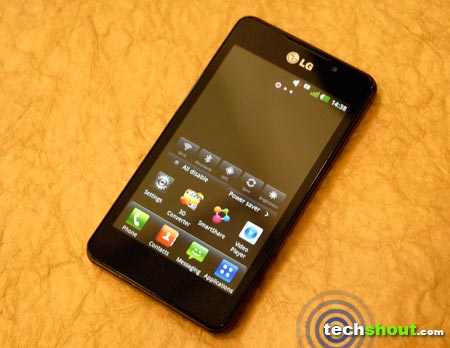 The Gingerbread-based LG Optimus 3D Max which we’ve picked up for a review is the refurbished version of the Optimus 3D that was launched nearly a year ago. The latter along with the HTC Evo 3D, were the first Android-based smartphones to give the world a taste a glasses-free 3D experience. And the South Korea-based conglomerate appears to be the only one of the two to follow up on the technology. Stereoscopic 3D hasn’t failed to amuse many, but is it in for the long run? A gimmick as some may call it, LG still seems to have hope that 3D visuals will have a future in the mobile device market. While some tend to learn the hard way, we somehow feel that the company isn’t going to give up until they get things right, hence the 3D Max. 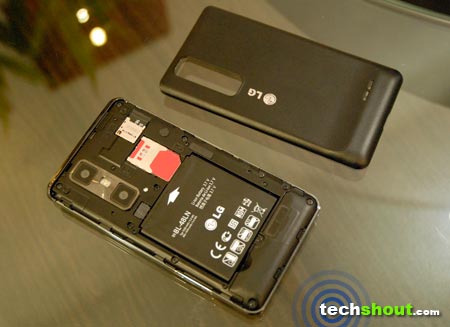 If iPhone fans were ticked off at the fact that the difference between the 4 and 4S were hardware-based, then it might sting aficionados that the 3D Max still houses those similar components carried by its predecessor, with the variations being a bumped up processor, more RAM and a couple of added attributes. Featuring a ‘Tri-dual’ configuration, you’ll find the same TI 0MAP4 4430 chipset affixed with dual processing cores clocked at 1.2GHz, 1GB of dual channel RAM and dual memory. The SOC is based on the ARM Cortex A9 architecture and incorporates a PowerVR SGX540 GPU. 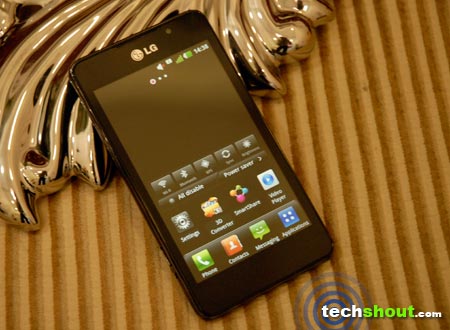 The 4.3-inch stereoscopic LCD capacitive touchscreen has been replaced with a Nova Plus 3D one on this new variant. Additionally, it proffers WVGA resolution of 800 x 480p and a 520nit brightness level. Apart from the glasses-free 3D experience and the decent availability of 3D apps from SmartWorld, LG has thrown in a converter tool which renders 2D games and apps in a stereoscopic view. Moreover, with the rear-facing 5MP AF cameras, you’ll also be able to snap up images and record videos in 3D. A VGA front snapper is employed for live face-to-face calling and where memory is concerned, you’ll have 5.35GB of available storage from the 8GB built-in ROM. 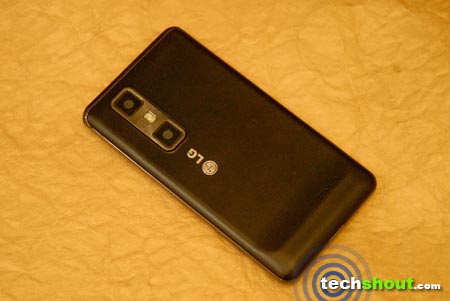 The first thing you’d notice about the LG Optimus 3D Max is that its edges are less curved as compared to well smoothened out ones on its predecessor. Built around dimensions of 126.8mm x 67.4mm x 9.98mm, the device is approximately 2mm thinner than last year’s 3D phone and slides in and out of a pocket with ease. Our review unit arrived drenched in black, while LG is even offering a white version. The device is certainly built with looks good enough to drool over. The front dons a complete Gorilla Glass 2 protective coating over the secondary camera, the display and the 4 capacitive touch buttons. 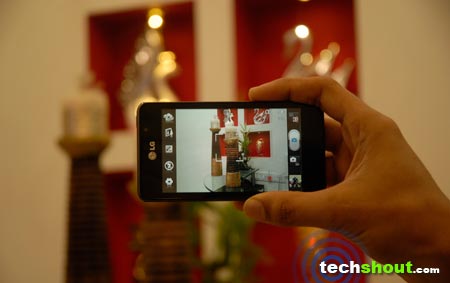 Shiny as it is, the touch panel has a thing for smudges that tends to overpower the screen. A thick bezel runs along the sides, flaunting a gleaming metallic shade. On the left, you’ll find the volume controls and a micro-USB port that’s fitted within a sealable compartment. While the dedicated 3D button/camera key sits on the right, the top houses the 3.5mm audio jack and power button. Moving to the flip-side, there are dual cameras and LED flash. Peel open the highly flexible rear panel and you’ll be presented with the SIM tray and a hot-swap microSD card slot. 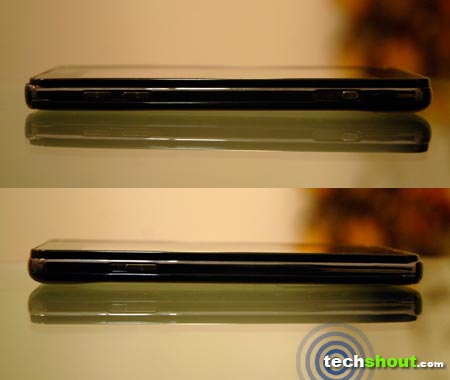 Let’s start from scratch – As much as we’re expecting LG to do more with the interface, the 3D Max still packs in the old Optimus 2.0 UI which its predecessor and the Black arrived with. However, the one on the Max is a bit more refined and smoothened out, tagging along a few tweaks here and there. If you’re kind of skeptical about the availability of 3D content, the 3D Zone in LG SmartWorld has a wide catalog of titles and utilities that can be optimized with 3D visuals by running them through the 3D Converter app. To take entertainment to a new level, the device brings in MHL support for connectivity with HDMI compatible displays, and the Dolby Mobile enhancement for a richer audio experience. 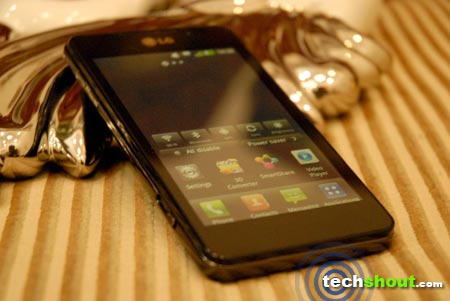 Based on benchmark tools, the LG Optimus 3D Max scored 5351 points on AnTuTu and 2122 points on Quadrant Standard edition. And if comparison sheets provided by these apps are to be believed, you’ll find that the device in question outruns the Kindle Fire, though barely, while it almost stands at par with the year-old Optimus 2X. Apart from the bunch of preloaded games such as N.O.V.A, Lets Golf 2 and Asphalt 6 which run flawlessly in both 3D and 2D, we also put in an hour playing a couple of demanding titles like H.A.W.X., Riptide GP and GTA III. Performance is at no threat here, although we did experience a few lags while recording videos in HD. 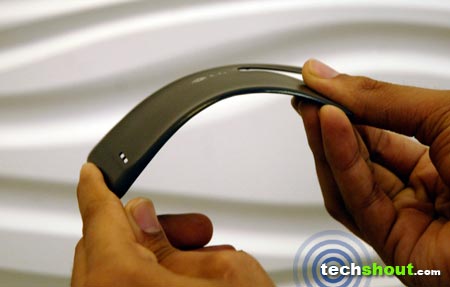 The dual cameras capture stunning 3D images, but not so great 2D stills. And LG could have done better with the camera app by adding in more features like panorama shot, stitch shot and various others. It took us nearly 3 recharges before we could complete a full hands-on with the smartphone. The 1,520mAh battery may seem powerful to get you through the day. But when put to the task, a single dose barely lasts for a little over 4 hours of usage inclusive of web browsing, 3D gaming and listening to music.
Sample video in 3D: 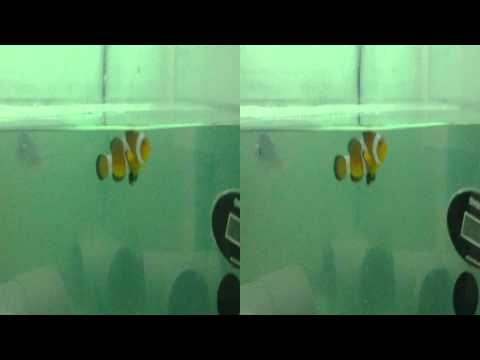 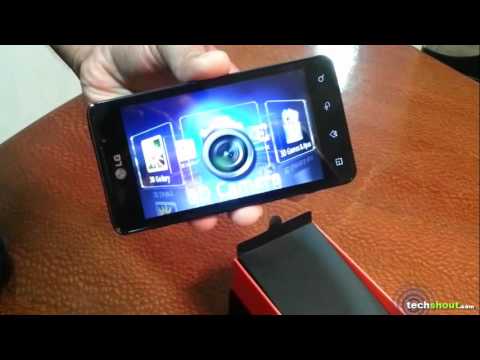 The LG Optimus 3D Max has a robust build; strong on the outside and quick on its feet.

If you can avoid moving your head while watching the screen, then you’ll surely enjoy the 3D visuals the 3D Max has to offer.

The 3D button which also doubles as the camera key lets you enable and disable stereoscopic 3D with a single press.

4 hours of moderate usage and you’ll be searching for a wall socket to juice up the battery again.

The camera lags a lot while recording HD videos.

To put it all down in a single line, the South Korean conglomerate appears to have sent out the Optimus 3D for round 2, with a pat on the back, a bit more encouragement and a couple of enhanced features. The LG Optimus 3D Max is a much more slim and refined variant of the former smartphone. You could say it took them almost a year to bring their 3D-enabled handset closer to perfection. We’re giving the device an 8.5 out of 10 rating for being just the entertainer we expected it to be. It is available in India between Rs. 28,000 and Rs. 30,000. So now that we’ve seen and used the sequel to the ‘world’s first 3D phone,’ would we like to witness the coming of the next iteration? Just like LG, even we’ve got hopes that 3D technology on mobile gadgets will hit it off someday.