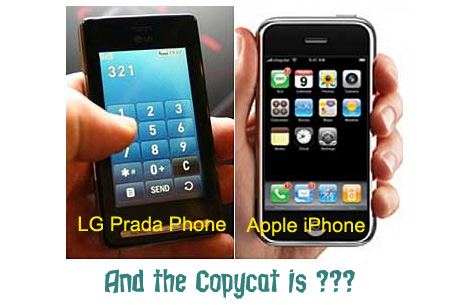 According to reports, LG Electronics is alleging Apple of stealing the concept of its much-hyped iPhone from LG’s own Prada model.

As per a Korean website, Woo-Young Kwak, head of LG Mobile Handset R&D Center, at a press conference said, “We consider that Apple copied Prada phone after the design was unveiled when it was presented in the iF Design Award and won the prize in September 2006. We take that to mean ‘Apple stole our idea.”

Though, the Apple’s iPhone and LG’s Prada were both launched around the same time, and sport quite similar appearances, it was pretty vague as to which company held the original design concept and which company had copied it. However, now LG has publicly stated that Apple has copied theirs. Though, there is no news of a lawsuit against Apple yet.

Experts have pointed out that the two phones differ in many aspects. The KE850 Prada phone, which claims to be the world’s ‘first completely touch screen mobile phone’, is a tri-band GSM handset with EDGE support, unlike the quad-band iPhone. It has a small 3-inch screen, with a resolution of 240×400, while the iPhone’s display is .5 inch larger, with a 320×480 resolution. Also, the KE850′s user interface is flash-based, whereas the iPhone runs OSX. Moreover, the Prada has Bluetooth 2.0, unlike the iPhone, which has WiFi capability.

Following the launch of Apple’s iPhone in January, many Internet users debated over the similarities between the two handsets. However, Apple still insists that they’ve been working on the iPhone for a long time filing 200 patents.

There has been speculation in the media that Apple apparently saw the pictures of the LG Prada phone floating around Internet photo sharing sites like Flickr and decided to launch the iPhone a week ahead of its original schedule.

The LG KE850 Prada is expected to sell for around US$780 which makes it steeper than the iPhone’s estimated $699.

Lawsuits just do not seem to leave Apple. The company lost a patent lawsuit with Creative Technology, over the user interface of the iPod. Apple ended up paying $100 million to the company for copyright infringement. Then Cisco sued Apple for trademark infringement of iPhone name, and now LG is all battles against the Cupertino, CA-based company.