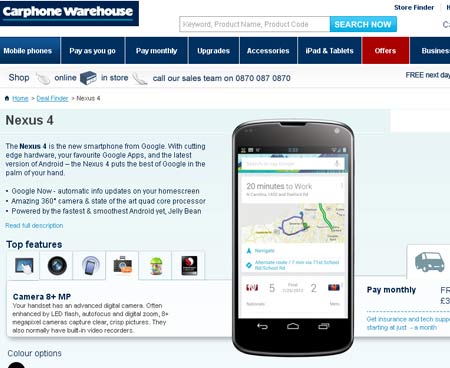 After making a brief appearance on the Carphone Warehouse online store, the LG Nexus 4 has been spotted on display advertisements at the retail stores of this seller. While leaked images and details have surfaced on the web, there hasn’t been an official announcement regarding the next Nexus phone.

A member of the XDA-developers forum with the username adamski123, posted the phone’s pictures and these were then spotted by Android Authority. Probably, it was meant to go official at the Android event that was slated to be held today, but was cancelled on account of Hurricane Sandy. Naturally, the smartphone sports the same specifications that were leaked out the last time. Moreover, the images have also revealed how much prospective customers are required to shell out, if they wish to pick up the unlocked version of the Nexus device.

To refresh memories, the upcoming LG handset offers a multi-touch real estate of 4.7 inches and this IPS display can render visuals in 1280 x 768p resolution. A 1.5GHz quad core Snapdragon S4 processor is assigned the job of ensuring smooth multitasking on this Android device. While there may be a front-mounted webcam, the website had revealed that the handset will definitely employ an 8MP auto focus camera complete with other features like LED flash, digital zoom and video recording capability. Also, as was expected, the smartphone may not be deployed with Android v4.2, but it could take advantage of Jelly Bean v4.1.2.

The unlocked LG Nexus 4 price tag is likely to read as £389.95 through Carphone Warehouse, while carriers such as O2 and Vodafone UK may sell the device for free with a monthly plan of £31 and a two-year customer agreement.