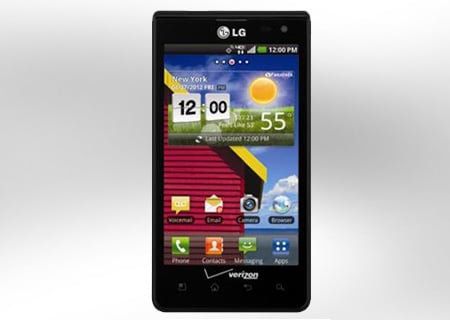 The latest 4G LTE installment, the LG Lucid, recently went official in the U.S. and it’s soon to roll out through Verizon for a little lower than $80. Putting previous speculations to rest, this slab of Gingerbread is expected to stack up on shelves starting tomorrow.

On the specifications front, the smartphone operates on the Android 2.3 OS, but is soon to hit ICS status. It employs a dual-core processor clocked at 1.2GHz and 1GB of RAM for better multitasking. Besides the protective coating from the Corning Gorilla Glass over the 4-inch touchscreen, the Lucid comes with DLNA certification that’s accompanied by the SmartShare application. On its rear, rests a 5MP AF camera with full HD 1080p recording capabilities.

The company states that the handset in question is designed with convenience at the forefront, in order to deliver an intuitive experience for users who are fairly new to the platform. This is complemented by the Quick Reply feature which apparently eliminates the need for exiting apps or minimizing them to reply to text messages. While shortcuts for launching certain applications like the phone, messaging, voicemail and camera, can be accessed straight from the lockscreen, the Quick Dialer widget allows users to place calls through the homescreen itself.

The LG Lucid price amounts to $79.99 after a $50 mail-in rebate. Potential users can pick up the handset through Verizon Wireless Communications Stores or from the company’s website along with a new 2-year customer agreement. Customers will also have to subscribe to a Nationwide Talk plan and a data package which start at monthly rates of $39.99 and $30 with 2GB of data, respectively.