The LG Homeboy is not the G Pad you’ve been waiting for. In fact, it’s not even an LG device, but a Samsung (insert: snicker) product that the company is selling. The odd scenario of LG offering a Samsung tablet is only matched by the oddball name by which it has been listed.

Just to clear up your mind which is thoroughly confused by now, LG has added the Samsung Android device to its U+ (or Uplus) portfolio. U+ is a South Korean telecom company owned by LG and it is under this banner that the Homeboy has been released. The slate appears to be the Galaxy Tab 3 with the U+ branding on it. So a 1.2GHz dual core chip, Jelly Bean, 1GB RAM, 8GB/16GB ROM and a 7” screen should be on the menu. 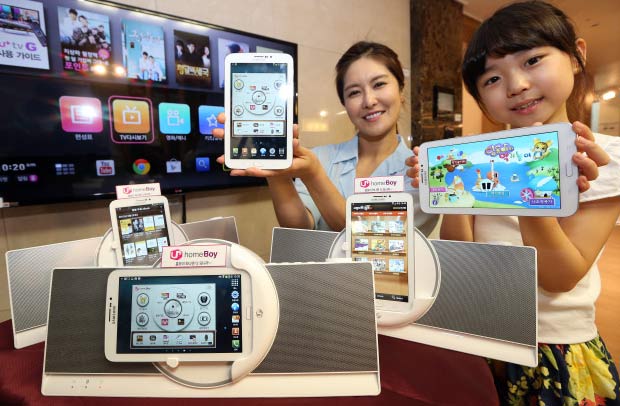 Android Beat cites that The Korea Herald compares it to Amazon’s Kindle while marking access to 50 television channels, a horde of movies, numerous songs and thousands of eBooks among the entertainment features users can look forward to. Answering a call and various other functions will be operable via voice recognition. Always worried about someone breaking into your house while you’re away? LG seems to have added software that can capture images of the burglar and even alert you to the same through text messages.

But when will LG bring out a tablet of its own? There are rumors of not one, but two slates in the making. We reported about the G Pad and V500 a few days ago. The first is supposed to be an 8.3-inch device, while the second is speculated to hit the 10-inch territory. So fingers crossed until the IFA 2013 unfolds next month.