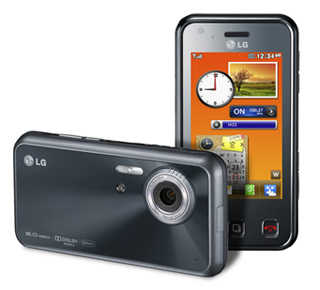 LG has announced the release of its full touchscreen 8 megapixel multimedia phone. The latest LG-KC910 phone will hit the European market by this month.

The KC910 is the first phone from LG to feature Wi-Fi connectivity. In addition, it includes a built-in GPS, which allows geo-tagging of the photos.

The integrated 8MP camera further comes equipped with Schneider-Kreuznach certified optics, a Xenon flash, auto and manual focus, sensitivity up to ISO 1600 and. It also features Touch Shot function which allows users to focus on any object by touching it on screen. The shutter fires automatically when the user’s finger is removed from the screen. The camera also features blur reduction capabilities.

For recording videos, LG-KC910 comes along with support for DivX and Xvid encoded video.

The KC910 includes support for 3G HSDPA networks for seamless connectivity. Other features include Bluetooth 2.0, Wi-Fi, microSD slot for up to 8GB of memory, 3-inch WQVGA 240×400 touch display and TV-out for watching images or videos on larger screen.

The LG-KC910 phone will be available in Europe in October.