LG’s planning big changes for its next flagship phone, as evidenced by a new leak courtesy the folks over at TechRadar. First of all, the handset is going to go by the name LG G7 ThinQ.

Second of all, there’s a very prominent notch up top which looks just like the iPhone X’s cutout. This has been rumored before, and the photos provide more evidence for it. It’s drawn a lot of controversy, but LG is going full speed ahead with it in any case. It seems to be in early testing in the US and bears the model number LG-G710TM.

The G7 ThinQ’s screen apparently measures 6.1-inch diagonally and looks to be of the nearly bezel-less type. There’s a power button to the right and a dedicated AI button to the left, just like the Galaxy S9 and Galaxy S8. Users might be able to press the key to bring forth Q Voice and Q Lens, similar to how Bixby works in the aforementioned phones. 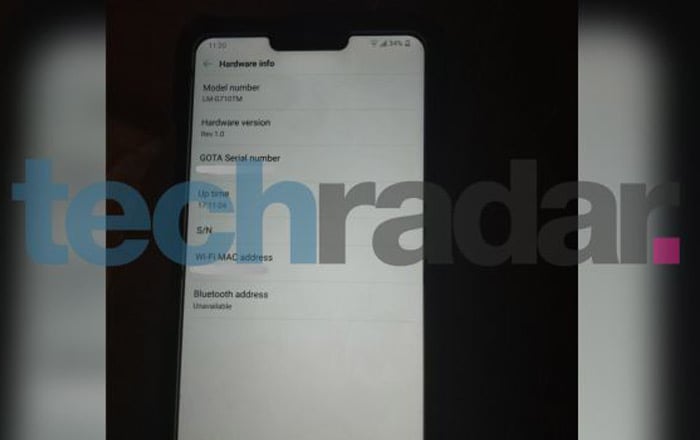 It’s not clear yet if people will be able to customize the button to do something else if they’re not interested in having a permanent AI key. LG’s artificial intelligence tools first came to prominence in the V30S ThinQ and the new G7 is shaping up to be a continuation of that effort.

As for specs, screenshots indicate that the G7 ThinQ will boast of a Snapdragon 845 processor, 4GB of RAM, and 64GB of ROM. Other variants could be launched with more memory. Even the device’s AnTuTu results have come to light, with the smartphone achieving a score of 252473. This is better than the Galaxy S9, but not as fast as the Sony Xperia XZ2.

The LG G7 ThinQ is probably going to be announced in late April followed by a wide release in May.