The LG G7 ThinQ has finally made its official debut, after numerous leaks and teasers revealed pretty much everything there was to know about the phone. The one aspect which didn’t come out was its price, but the company has chosen not to reveal cost details yet.

As expected, the LG G7 ThinQ looks like a cross between the iPhone X and Galaxy S9. It’s the latest Android phone to jump on the notch bandwagon, but it’s trying to reel in notch haters by allowing them to blacken out the sides of the cutout to make it blend in. Users can even change the color of the notification bar.

LG actually delayed its flagship smartphone to get back to the drawing board, but the results are not particularly groundbreaking. The device does have a new design when compared to the G6, featuring Gorilla Glass 5 on the front and back and 50% smaller bottom bezels than before. 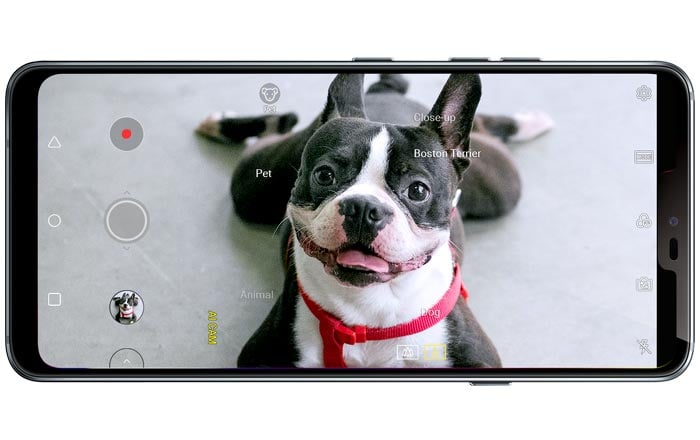 Moreover, the G7 ThinQ’s 6.1-inch 19.5:9 FullVision screen is bigger and made out of a Super Bright LCD display which can apparently hit up to 1000 nits of brightness. Most premium phones favor OLED, so it remains to be seen whether this will be a deal breaker for consumers.

LG is hyping up the handset’s artificial intelligence. Firstly, the device has a dedicated button below the volume rockers which launches the Google Assistant with a single tap and Google Lens with 2 taps. The former answers any queries, while the latter can identify objects in real life and look them up online.

The G7 ThinQ’s additionally been equipped with Super Far Field Voice Recognition (SFFVR) and a highly sensitive microphone to help the Google Assistant heed voice commands from up to 5 meters away. The company thinks this could make it a solid alternative to a dedicated smart speaker.

Secondly, the 16MP standard and 16MP Super Wide Angle dual cameras at the back have both been blessed with AI. The tech provides 19 shooting modes for intelligently optimized photos and 3 effect options if the automatic one doesn’t fit.

The lenses themselves offer Portrait Mode for the first time in the LG G series lineup, landscape shots with less edge distortion, and an AI-powered Super Bright Camera which is supposed to allow for photos that are 4 times brighter in challenging light conditions through a combination of pixel binning and software processing.

LG usually places a heavy emphasis on audio in its phones, and its latest one is no exception. There’s Hi-Fi Quad DAC and 7.1 channel audio for high-quality sound via high-impedance earphones, DTS:X 3D sound support, and Boombox Speakers. The last uses the internal space of the device as a resonance chamber to deliver double the bass.

Specifications of the LG G7 ThinQ: