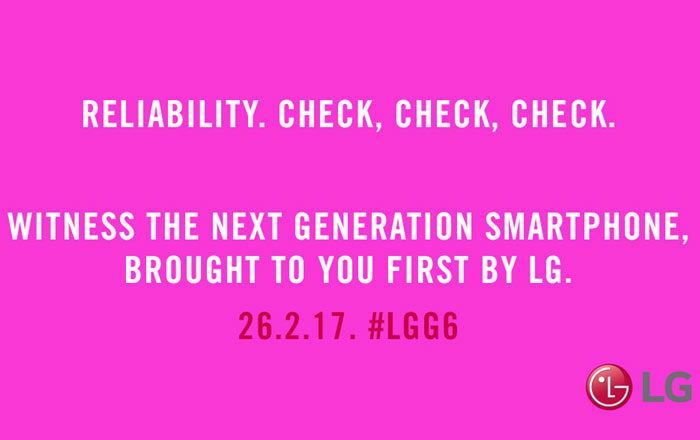 LG’s promotional blitzkrieg for the G6 is in full swing, with the latest teaser for the smartphone promising reliability. The handset is due out on February 26 at a pre-MWC 2017 event in Barcelona.

The bright pink promo for the LG G6 showcases the word Reliability followed by Check 3 times. The vague teaser could be a knock at rival Samsung’s Galaxy Note 7 disaster. It might also be a promise to make sure all software and hardware is tested thoroughly to avoid mistakes.

LG has in the past been the recipient of harsh criticism due to bootloop issues on phones like the G4, G5, V10, V20, and Nexus 5X. The G6 may well break this pattern if the brand follows through on its guarantee. The word reliable has popped up in association with the G6 before.

LG had released a video teaser for the device back in January which featured different people talking about what they sought from a phone. The overall consensus was that consumers wanted a more reliable handset that didn’t force them to keep paying for a cracked panel.

It’s possible the G6 will boast of something like a crack-proof display or perhaps a free screen replacement program. The same teaser further calls the handset the next generation smartphone without specifying what this entails.

As far as official information goes, LG recently revealed that the device will carry support for 32-bit Hi-Fi Quad DAC to output enhanced audio. The feature is already a highlight of the brand’s V20.