The LG G6 is one of the most frequently leaked forthcoming devices out there, with even the brand itself releasing teaser after teaser to generate interest in the phone ahead of the MWC 2017. Two separate reports now offer yet another look at the handset, one in its natural element and the other as an official-looking press render.

Starting off with the latter, Evan Blass seems to have gotten hold of a photo of the black LG G6. The glossy finish strongly resembles the iPhone 7’s Jet Black avatar, though it remains to be seen if it’ll be as prone to scratches and fingerprint smudges.

The image also serves to confirm the G6’s unique rounded display corners, minimum bezels, and 18:9 aspect ratio giving it a taller look. A pair of dual cameras can be spotted on the back, with a dual-LED flash module sandwiched in between. There’s also a rear-mounted fingerprint scanner.

The other Weibo-sourced leak has the LG phone being compared side-by-side next to the LG G5. The contrast between the two is pretty striking. Both appear to have almost the same body dimensions, but the former has a much larger screen thanks to the narrow bezel design. 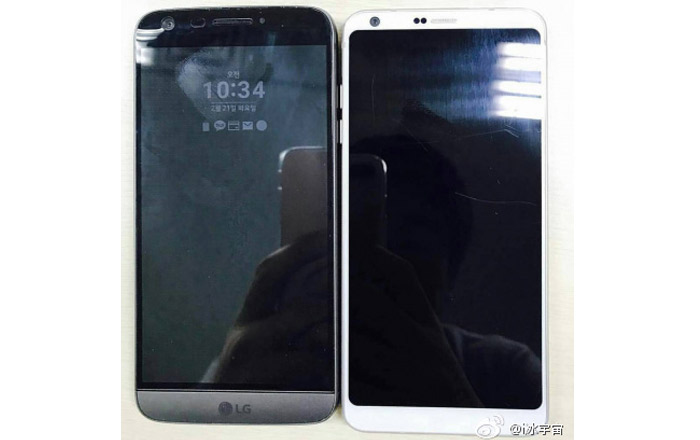 LG recently verified talk that the G6 would have a 5.7-inch panel, making it a few inches bigger than the G5’s 5.3-inch display without giving rise to a bulkier smartphone. The new handset’s screen is set to boast of a 1440 x 2880p resolution, slightly more than standard QHD numbers due to its wider 18:9 aspect ratio.