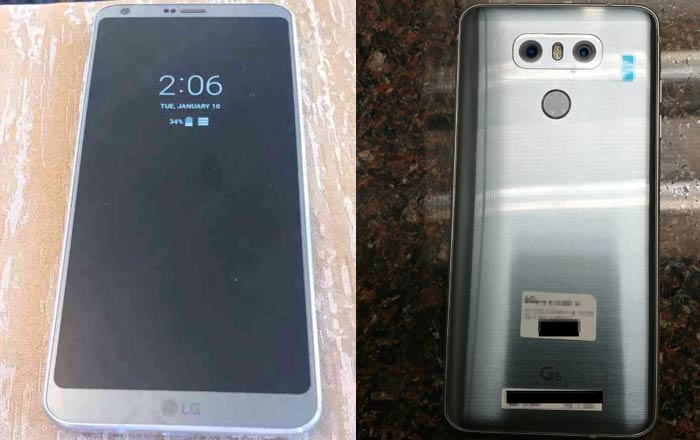 The LG G6 has been a constant presence amongst the rumor mills as the date of its MWC 2017 launch approaches closer and closer. The latest leak showcases the handset’s front and back, offering a clearer picture of what to expect come February 26.

The hands-on images are the first to showcase what the LG G6’s Always-On Display will look like. The tool appears to tell users what the time, battery levels, and date are at all times. The screen itself has rounded corners, slim borders flanking it on either side, and slightly bigger bezels at the top and bottom.

Based on the snaps, LG is going to equip the handset with dual cameras on its back and a rear-facing fingerprint scanner. The phone seems to of the shiny variety, at least in its silver avatar, and made out of metal. Previous leaks have indicated that the brand is going for a glossy look for its next flagship.

As for specs, a source told 9to5Google that the G6 will pack a 3200mAh battery, 4GB of RAM, 32GB of ROM, a Snapdragon 821 processor, and a 5.7-inch FullVision panel. The last recently got detailed in a press release which revealed that it would boast of features like a unique 18:9 ratio and QHD+ (2880 x 1440p) resolution.

LG also teased the new UX 6.0 interface which is set to make its debut on the G6. Squares seem to be the focus of the software, dividing the display into equal parts for enhanced multitasking and camera functionalities.