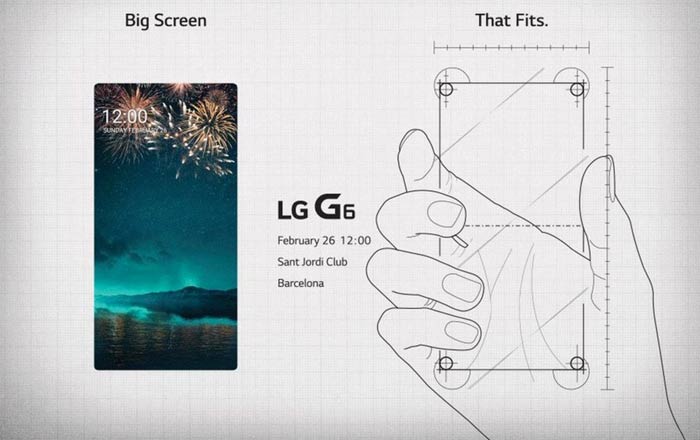 The LG G6 has gotten leaked multiple times over the course of the past few days, leaving very little to the imagination. The company itself has now gotten in on the action, releasing an invite which teases one of the phone’s most talked about features.

To recall, LG had previously issued out an invite for its February 26 event that revealed little more than the date and the tagline ‘See More. Play More.’ The same fireworks wallpaper is back again in its new teaser under the caption ‘Big Screen.’ It’s accompanied by a blueprint that bears the headline ‘That Fits.’

This is a pretty clear indication that the LG G6 will have a large screen that fits into a compact body with minimum bezels impeding the view. The hand seen in the drawing appear to be comfortably wrapping itself around the device, hinting that the huge screen won’t lead to an unwieldy smartphone.

LG had previously all but confirmed that its next flagship would have a 5.7-inch panel that outputs a resolution of 2880 x 1440p and bears an unusual 18:9 screen ratio dubbed Full Vision. On the rumor side of things, the device is expected to drop the G5’s modularity in favor of things like waterproofing.

The G6 may have to drop the series’ signature removable battery unit to achieve resistance against liquids. In terms of specs, the smartphone is supposedly going to make do with a Snapdragon 821 SoC, dual cameras, and support for Google Assistant.

With the Samsung Galaxy S8 set to give the MWC a miss this year, the stage is set for the G6 to hog the limelight with its own bezel-less offering. LG is apparently going to put the phone up for sale on March 9 in South Korea and April 7 in the US.