There’s been a lot of build-up and excitement surrounding LG’s flagship G5 in the run-up to its launch. The company has gone all-out with its latest offering, probably hoping the phone will change the brand’s fortunes and help it break into the upper ranks of smartphone makers.

The modular LG G5 comes with a truckload of stand-out features, many of which center around the concept of a LG Playground ecosystem which consists of a number of companion devices dubbed LG Friends. For instance, there’s a LG 360 VR headset that is supposedly able to recreate the experience of watching a 130-inch TV and connects to the handset through a USB Type-C cable.

As a result, users will be spared of having to insert a smartphone inside the goggle and increasing its weight. Other cool toys include a LG Rolling Bot which functions as a monitoring device or even a pet companion. The robotic ball rolls around capturing images and videos through an 8MP shooter and can be controlled via Wi-Fi.

LG is making a major push towards photography with the G5, equipping it with a 16MP and 8MP camera setup on its back. The latter sports a 135-degree wide angle lens which the manufacturer boasts is the widest in the world. Both units can be utilized separately or together to create effects like Pop-out Picture for a picture-in-a-frame look.

The South Korean brand has also introduced 2 photography accessories in the form of the LG 360 Cam and LG Cam Plus. The first is a 360-degree camera fitted with two 13MP 200-degree wide angle lens, 4GB of expandable ROM and a 1200mAh battery. It captures 2K video in 5.1 surround sound.

The second simulates the feeling of using a digital camera by acting as a grip for users to hold on to while clicking a photo. It can be attached to the bottom of the G5 and has buttons for power, record, shutter, LED indicator and zoom. The module additionally raises the battery capacity of the smartphone by 1200mAh.

A quick look at the specs of the LG G5:

Speaking of its battery, LG has managed to include a removable unit despite the metal unibody design of the phone. All a consumer has to do is click a key on the side of the handset and the bright yellow powerhouse slides out from the device. The phone further ships with Always-on, allowing users to instantly view notifications while consuming only 0.8% of the battery per hour.

The LG G5 will hit markets worldwide in April. Its price and availability details should be announced closer to its launch. 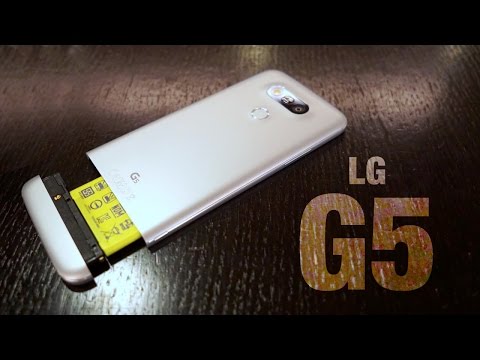