LG has added yet another phone under its flagship series, the G3 A, which is a toned down version of the original, but with LTE-A connectivity. The handset has been officially launched in South Korea and it looks like it’ll be exclusive to SK Telecom for the time being.

The LG G3 A looks exactly like the current flagship, but is slightly smaller and has its specs downgraded. Put in another way, you could say that the smartphone is last year’s G2 with a new attire and name. The smartphone features a 5.2-inch IPS LCD panel and 1080p visuals instead of a 2K panel. Apart from this, the processing power has been reduced. 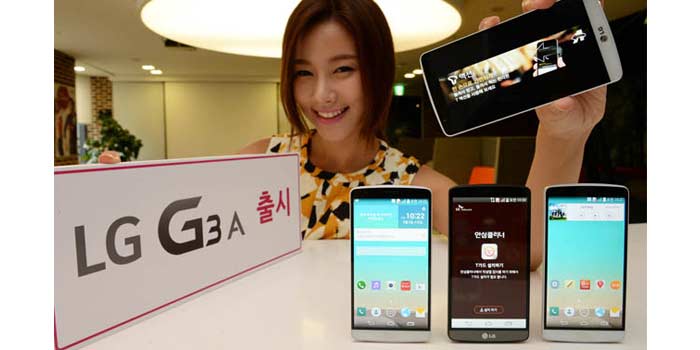 In place of the 2.5GHz Snapdragon 801 SOC, the company has gone with a 2.26GHz Snapdragon 800 chipset which is still a top-tier component and won’t pose a huge difference in performance. The RAM is down to 2GB and internal storage is listed as 32GB. There’s also a microSD card slot and a 2610mAh battery.

Also see: LG G3 Stylus will compete with the Note 4 alright, but not in terms of specs

On the upside, the rear camera is the same 13MP snapper found on the flagship and it also tags along OIS+ as well as laser AF. Additionally, the handset comes with Android 4.4 KitKat out of the box and also offers the same software enhancements such as Knock Code, Smart Keyboard and Smart Notifications amongst others.

Here’s an overview of the LG G3 A’s specs:

The LG G3 A will be available in South Korea via SK Telecom for ₩704,000 which amounts to around US$679. This is higher than what you’d pay for the unlocked flagship model that’s selling for US$620.