The QuickWindow case for the upcoming LG G2 has been announced and the South Korean manufacturer has revealed that it will be made available along with the device in question. The OEM already has a diverse portfolio of accessories to its credit that is inclusive of various other types of coverings, headsets, portable chargers and more. It looks like LG has taken inspiration from its arch rival as this flip case bears an uncanny resemblance to Samsung’s S View cover for the Galaxy S4.

Meant especially for the G2, the QuickWindow case will hit store shelves in various shades to allow users to personalize the smartphone. It is slated to come drenched in hues of yellow, mint, purple, blue, black, pink and white. One of the main advantages of the accessory is that it eliminates the need to open the cover in order to see notifications. As the name suggest, it has a window that lets users take a peek at their notifications through the flap itself. In order to activate the function so it shows the information on the small opening, you are required to swipe a finger on it and the UX will immediately display it. 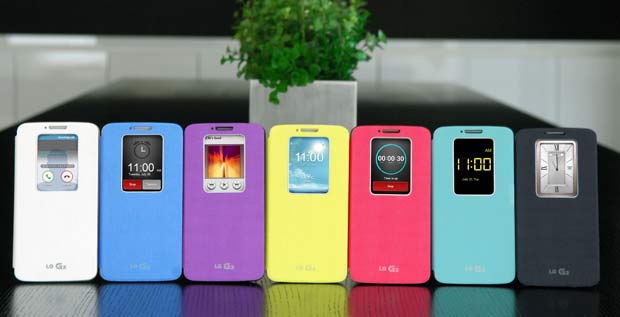 Details about incoming calls and text messages as well as some other things like clock, alarm, music player and weather report appear on this opening. Dr. Jong-seok Park, the president and CEO of the company, informs us that the QuickWindow casing has been crafted based on the vision of the designers who have created the smartphone itself.

We already know that the G2 will be unveiled at an event held in New York on August 7, 2013 and the QuickWindow case is expected to tag along. Nothing has been mentioned about the price details of the accessory though.