It is August 7 people and we’re just a few hours away from witnessing the LG G2 go official. Well, if the wait is too much to bear, embedded below is a small appetizer of what’s to come from the South Korean conglomerate. We’ve seen the device’s prototypes leak out numerous times and we’ve even seen the company tease the handset over the past month, and now finally, we’ve got something concrete to present to you.

The official images of the G2 come curtest of none other than @evleaks who has disclosed both front and rear views of the smartphone. The leaked pictures confirm that the device will sport a super slim bezel and rear buttons for volume control as well as unlocking the phone. The rear panel also shows of a textured design. Like the Optimus G, LG has teased the G2 to a great extent from posting videos, disclosing the official name and processor as well as announcing QuickWindow, the official case for the handset which is based on a similar idea as Samsung’s S View cover. 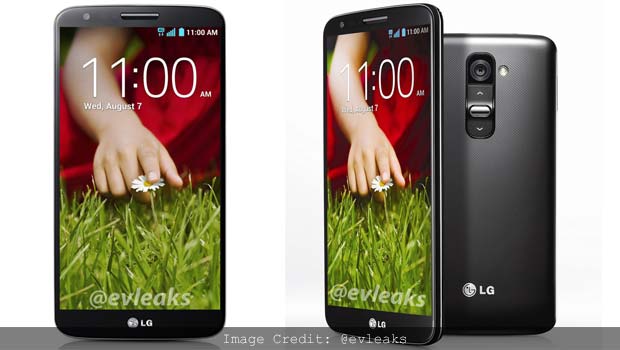 What we know so far based on speculation is that the G2 smartphone will arrive with Android 4.2 out of the box. The display size is estimated at 5.2 inches and it’s likely to be an OLED panel proffering 1080p resolution. Apart from a 13MP camera, the phone will pack 3GB of RAM, a large battery and a Snapdragon 800 processor clocked at 2.3GHz.

LG has planned the official launch for the G2 smartphone today in New York. We’re just a few hours away from knowing the true features of the smartphone, so stay tuned for an update.