The LG G2 images that evleaks was seen bandying about earlier today are exactly what they were claimed to be – press shots of the new phablet from the South Korean company. One of the biggest highlights of this device apart from the fact that it’s got a conveniently short name devoid of ‘Optimus,’ is the button placement. The power and volume keys have been moved to the back panel, a dramatic departure from current smartphone designs.

But it stops at the buttons. As far as we can see, there’s nothing else about the G2’s appearance which sets it apart from other top tier Android handsets. So here’s a look at the key specifications of the device. A 5.2-inch 1080 x 1920 touchscreen with IPS technology is laid across the front panel which even sports a 2.1MP camera. Besides the keys we’ve mentioned above, a 13MP sensor also rests on the rear side. A 2.26GHz Snapdragon 800 chip involving a quad core Krait CPU as well as 2GB of RAM keep things alive and kicking. 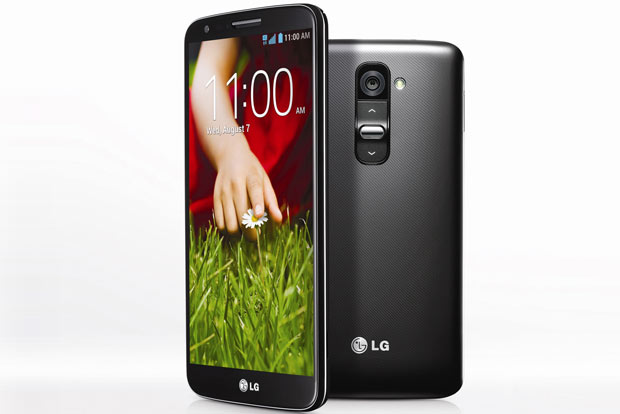 There are two memory capacities of 16GB and 32GB. The color options come in twos too – black and white. The handset will run Jelly Bean 4.2.2 out of the box and all of the aforesaid components are squeezed into a 138.5mm x 70.9mm x 89mm chassis. Taking a look at the technology integrated into the G2, there are a few practical UI features worth inspecting. When there’s an incoming call, raising the device to your ear coaxes it to lower the ringtone first and then automatically hit the Answer function.

Tapping the screen twice is enough to switch on the phablet, a more convenient way of powering it on as compared to flipping over the body and doing the same. Although we haven’t got a chance to try out the device yet, sounds like it may be easy to accidentally fire it up this way. But we’ll save our judgment for later. Want to prove to your friends (or significant other, perhaps) that you have nothing to hide? A Guest mode which only displays your pre-selected applications can be unlocked using an alternate unlock code.

In keeping with tradition, LG will first launch the G2 in South Korea. North America, Europe and other major markets can expect to welcome it after that. Given the vague schedule outlined by the company, all we can note is that it should be out in the said areas by early October at least.