LG hasn’t been the quickest to bring its latest flagship to India after launching it globally, but it has certainly priced the device very competitively. At the launch event, the company disclosed that the handset will retail in the country for Rs 41,500, which is much cheaper than the Rs 49,999 Note 3 and the Rs 44,990 Xperia Z1.

The G2 is definitely one of the cheapest flagships currently available with the latest hardware. The handset was originally launched in August and it has gone on sale in the US, the UK and across Europe. Compared to conventional smartphone designs, this one is a bit different. The main alteration is that the volume keys have been relocated to the rear panel, delivering a highly minimalistic appearance.

The LG G2 runs on Android 4.2 and it tags along the Optimus 3.0 UI. The device features a guest mode where you can limit what content is accessible to others, audio zooming that captures a specific audio when zoomed at during video recording, knock on which lets you wake the phone by a simple knocking gesture and a lot more.

Coming to the specifications, the handset is 138.5mm x 70.9mm x 8.9mm in dimensions. It sports a 5.2-inch full HD IPS display on the front and a 13MP camera on the rear with OIS and 1080p at 60fps recording. Powering up the handset is a quad core 2.26GHz Snapdragon 800 processor, while memory needs are catered to by 2GB of RAM and 16GB or 32GB storage choices. There’s a 3000mAh battery onboard as well. 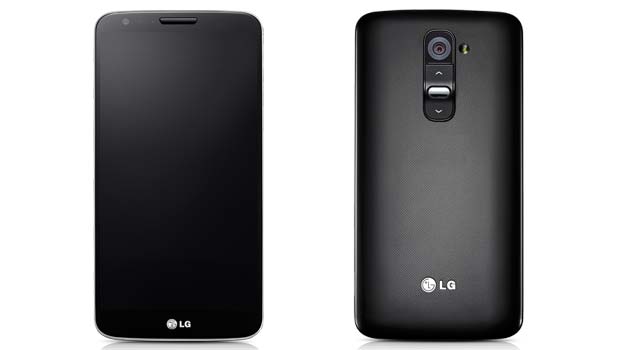 The aforementioned price for the LG G2 is for the 16GB model, while the 32GB variant is officially tagged at Rs 43,500. Both versions are available for pre-order at cheaper costs on Flipkart, while Saholic has priced the latter at just Rs 40,499.