The LG G Vista is a name that has sent a ball of speculations rolling among smartphone enthusiasts, as the existence of this yet unannounced device has been leaked through some promotional material. By looking at the images displayed in the ad, it’s hard to guess the exact nature of this device, and that is what has resulted in so many theories.

First among them is that it’s the LG G3 mini which has been in the rumor mills for long. Another speculation is that this leaked smartphone could be Verizon’s very own version of the new LG flagship, just bearing a different branding. Their displays will be the main distinguishing points for both these devices, but the leaked image is making it hard for us to judge the size of the phone’s panels. 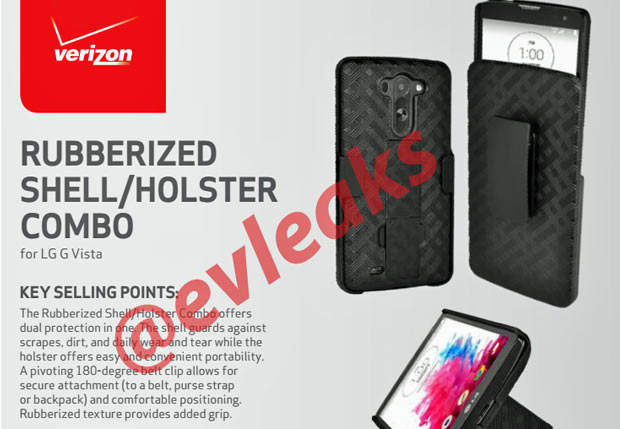 This picture has come via EvLeaks and shows the apparent LG G Vista device’s shell/holster cover which is likely to be released alongside it. The wallpaper on the phone as well as the rounded icons more than suggest that it’s a next-gen LG device, so there is again a finger being pointed towards either the LG G3 or its mini version.

The newest flagship from the company was launched back in May this year, equipped with a high-resolution 2560 x 1440 pixel (534 ppi) 5.5-inch display and a Qualcomm Snapdragon 801 chipset bearing a quad core processor. It grabs a 13 MP OIS+ camera and other advanced specs as well.

Whatever the Verizon LG G Vista is, we’re hoping to hear more about it soon. Stay tuned for additional details.