LG plans to launch the G Pro 2 first in Korea, Feb 13 is the date

Another day, another LG G Pro 2 rumor and this time, it’s quite an exciting one. If the MWC 2014 is a bit too much of a wait to see the new flagship phablet, the South Korean conglomerate could unveil the smartphone in its hometown as early as next week. The company has started sending out invites for an event on February 13 which will take place in Seoul.

Now, while the company hasn’t directly specified what it plans to unveil on the said date, ZDNet Korea points out that the invite has the words ‘Knock-Knock Knockin’ printed. The G2 handset was launched with a tap to wake feature called Knock On and the source suggests that the invite indicates that the same function will be available on the LG G Pro 2 as well.

LG has already confirmed that it will announce the G Pro 2 at the MWC 2014. Apart from this, the company has also been kind enough to provide a few details on the camera features. The smartphone will come with a 13MP snapper like its predecessor, but will be able to capture videos in 4K resolution. Apart from this, the device will feature enhanced OIS technology and slow motion recording.

A recent leak suggested that the LG G Pro 2 may come with an ultra-thin bezel of just 0.4mm. This essentially means that the screen will take up the majority of the front panel, or approximately 77.2%. Design-wise, the phone looks like a larger version of the flagship G2 or a non-bendable variant of the G Flex, where the volume keys have been moved to the rear. 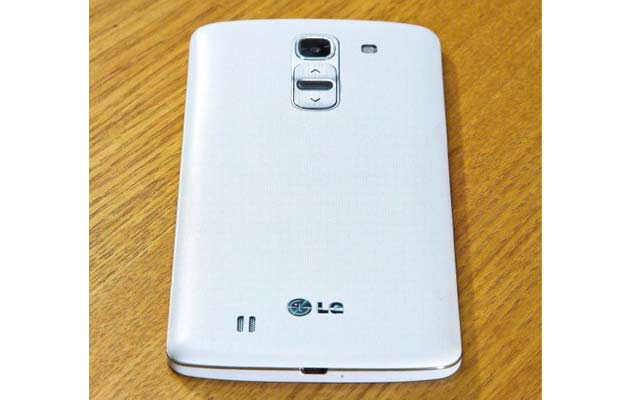 If the event in Korea is really for unveiling the LG G Pro 2, then we’re just a week away from seeing the highly anticipated smartphone go official. In other news, the Optimus G Pro will be treated to Android 4.4 KitKat by the end of Q2 2014.