In just a couple of days, we will most likely see the LG G Pro 2 go official in South Korea, while the rest of the world will be acquainted with the phablet at the MWC 2014 expo later this month. The handset has been leaked multiple times and even the company has officially contributed to the information that’s currently known.

Today’s leak, somewhat confirms the features of the highly anticipated device. The LG G Pro 2 has been spotted in the AnTuTu benchmark suite where the majority of features and components have been divulged. First and foremost, the smartphone will go by multiple model numbers, the D827, F350L and F350K. The handset will come with Android 4.4 KitKat out of the box and you can expect to find LG’s own custom UX. 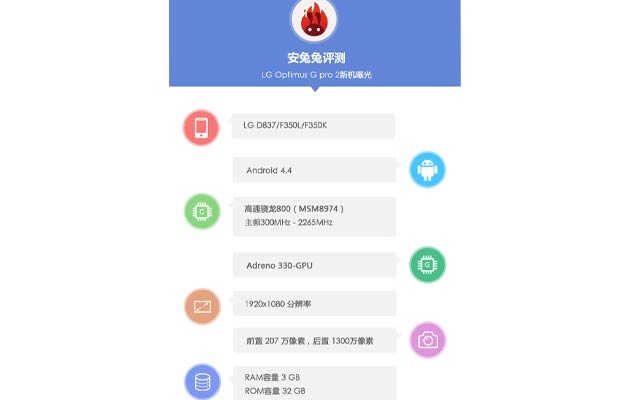 It’s quite interesting to see that the company has chosen the Snapdragon 800 MSM8974 SOC which is the same chipset found in the flagship G2, instead of the AB variant that offers a slight boost in frequency and a good bump in GPU speed. Like the competition, LG will also offer 3GB of RAM with the G Pro 2. Sadly, the screen resolution will be 1080p and not 2K as anticipated. Apart from these, the device will have 32GB of storage, a 2.1MP front camera and a 13MP rear snapper.

Where design is concerned, the LG G Pro 2 will look identical to the G Flex, but without the curved form factor. Also, the phone will have an extremely narrow bezel of just 0.4mm, making the majority of the front panel dedicated to the display. LG has confirmed that the phablet will be able to record videos in 4K resolution and it will have enhanced OIS technology amongst others.

LG is also said to be working on the G3 smartphone, albeit we’re most likely to see the handset surface sometime during Q3 of 2014.