While we wait for LG to reveal its new flagship device next week, the company has already launched its first 64-bit tablet. The new addition is destined for Sprint and it comes with Android 5.0 Lollipop out of the box and other attractive features for an affordable price.

The LG G Pad F 7.0 is basically available for free through Sprint, provided you sign up for a new 2-year contract. Also, you’ll need to have an active smartphone account with the carrier to avail of this offer. And if you don’t, a limited time promotion will land you the tablet and a handset for an affordable amount. Your options are basically the G3 handset at $90 per month or G Flex 2 for $95. 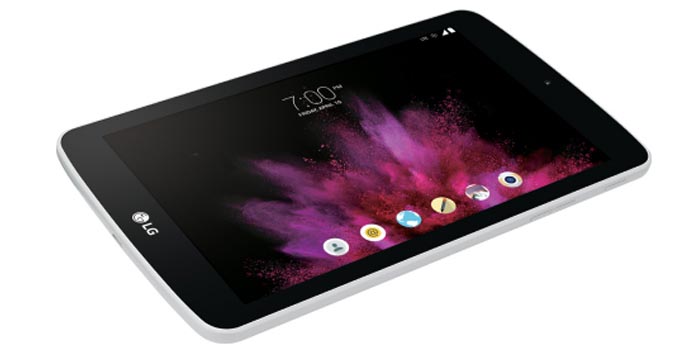 Both devices will be accompanied by unlimited data, talk and text and you also get 1GB of data specifically for the LG tablet. Speaking of which, the slate offers a 7-inch WXGA IPS and is powered by a 1.2GHz quad core Snapdragon 410 processor. Along with Android 5.0 Lollipop, the company’s usual software enhancements will also be onboard.

LG notes that Knock Code, Gesture Shot, SmartShare Beam and Dual Window will be preloaded to offer a rich experience. With the Q Pair tool, you’ll be able to hook up the G Pad F 7.0 to a smartphone and respond to messages as well as calls from the large slate itself. Additionally, the tablet will have 4G LTE data support for high speed connectivity.