AT&T has announced that it will be offering the LG G Pad 7.0 LTE tablet in the US starting August 8 and you’ll be able to grab the device for just $0.99. The catch here is that you’ll also have to pick up one of three smartphones, namely the LG G2, G3 and G Flex handsets, which will cost you extra.

The first two devices will cost you $99.99, while the current flagship is tagged at $199.99. These amounts are obviously accompanied by a two-year contract. This promo makes a lot of sense if you’re looking for a smartphone-tablet combo. But if you’re in for the LG G Pad 7.0 LTE only, you’ll be able to lay hands on the device for $149.99 with an agreement of two years. 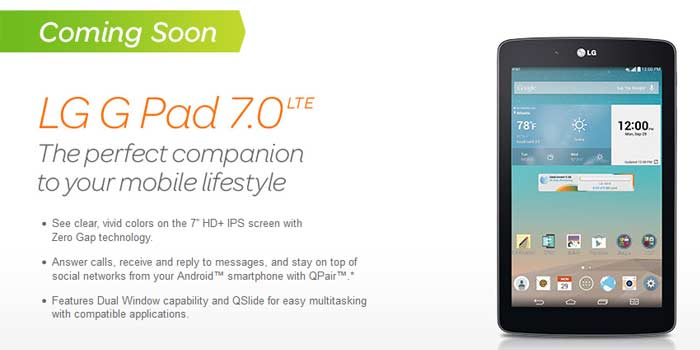 Additionally, the slate can be picked up with the no annual service contract plan that will cost $12.50 per month with no down payment, while the full retail amount is listed as $250. The G Pad 7.0 LTE is the smallest member in the company’s latest tablet lineup and it goes toe-to-toe with the Galaxy Tab 4 series from Samsung.

The device offers a decent roster of features with an attractive design. There’s a 7-inch HD display and a 1.3MP camera on the front, while a 5MP snapper is on the rear. The internal hardware comprises of a 1.2GHz Snapdragon 400 SOC, 8GB of storage and a 4000mAh battery. Where software is concerned, Android 4.4 KitKat comes preloaded along with numerous enhancements such as Knock Code, Quickmemo, Q Slider, Dual Winder, QPair and more.

On August 8, the LG G Pad 7.0 LTE will be available for purchase through AT&T’s online and retail stores. There’s no word on which color options will go on sale.