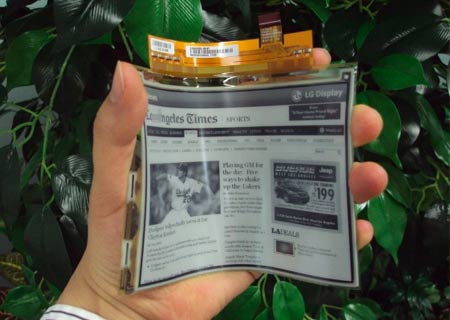 Those longing to have the realistic feel of magazines or newspapers on their eReaders are one step closer to filling up those urges as the LG flexible plastic e-paper display has now gone into its mass production stage. This technology is apparently ‘expected to revolutionize the eBook market,’ according to the Korea-based conglomerate. But considering that it’s capable of bending to a maximum of 40 degrees only, the display is most likely to add in a little twist to the way users interact with eReaders.

Aimed to offer users a paper-like reading experience, the EPD is built out of a plastic substrate which is said to be almost similar in thickness to protection films used on mobile phones. Compared to the glass e-paper display, the one from LG is apparently one-third slimmer than the former at 0.7mm and even weighs lesser at 14 grams. The e-ink screen headed into mass production stretches up to 6 inches diagonally and flaunts an XGA resolution of 1024 x 768 pixels.

“With the world’s first plastic EPD, LG Display has once again proven its reputation for leadership and innovation with a product we believe will help greatly popularize the E-Book market,” commented Sang Duck Yeo, Head of Operations for LG Display’s Mobile/OLED division. “Based on our success in mass-producing plastic EPD, we are excited as we look toward applying concepts from this experience to future developments like plastic OLED and flexible displays.”

The company claims its technology to be cost-effective, highly durable and capable of withstanding damages. Various tests were supposedly carried out by LG, which included repeatedly dropping the display from a height of 1.5 meters and a break as well as scratch analysis that yielded no noticeable damages.

The LG flexible plastic e-paper display is scheduled for shipment to ODM companies in China, after which finished products will be available in Europe starting next month.