LG may have already surprised us with some great devices, but we’re still highly anticipating the arrival of the company’s first smartphone with its in-house Odin processor. The handset has popped up a few times under the codename Liger and with the model number F490L, and it looks like we’ve finally gotten a glimpse of its design and features.

GSMDome is reporting that Japanese website Blog of mobile has managed to get its hands on a brochure which details the smartphone in question. The LG F490L Liger was reportedly posted on the company’s website in Korea and it’s said to carry the LG NUCLUN chipset which is better known by its development name, Odin. 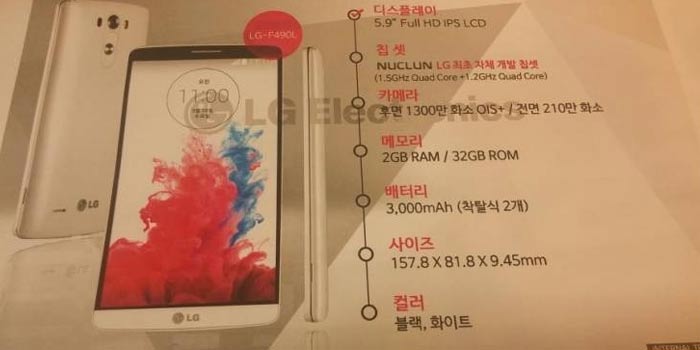 As you can see from the image above, the smartphone will end up being yet another variant of the G3 flagship. But it’ll be a larger release, even taller than the 5.7-inch G Vista that’s also known as the Gx2 in Korea. The device is said to flaunt a screen size of 5.9 inches and it won’t have 2K visuals like the flagship, but 1080p FHD resolution.

The Odin processor used here is an octa core one with two clusters consisting of 4 cores each, one clocked at 1.5GHz and the other at 1.2GHz. It’s safe to assume that the designs used will be the Cortex A15 and A7, respectively.

There’s still no word on when the LG F490L Liger will go official, but we hope to see it hit stores before or during the holiday season in South Korea at least.