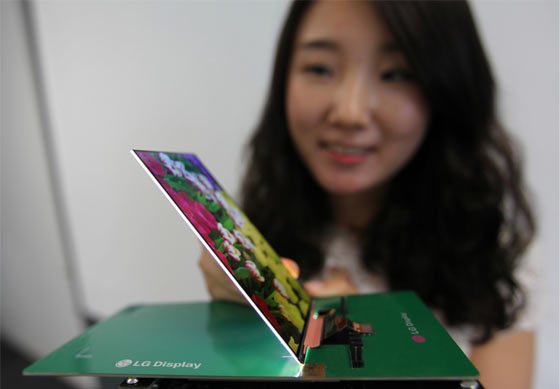 After having unveiled its flexible plastic OLED panel, LG Display is ready with its next invention which it calls the world’s slimmest full HD LCD. As can be seen in the image we’ve embedded above, this fresh piece of technology from LG is fit to be infused into smartphones, and thus, one can expect to see even thinner devices to be making their way into the market sometime in the future, if the new invention turns out to be a success.

Calling it a ‘state-of-the-art’ panel, the company explained that it will enable the creation of sleeker full HD smartphones that will feature better ‘grip-ability,’ along with an enhanced viewing experience. The LG display in question is a 5.2-inch one, and is just 2.2mm thin, with a 2.3mm bezel. Implementation of this technology on smartphones will no doubt even make them lighter in terms of overall weight.

One of the main components that have made this invention is the Advanced One-Glass-Solution (OGS) developed by LG Display. The company has revealed that it has inserted Dual Flexible Printed Circuits into the panel and the touch film, thus reducing the number of lines on the former by more than 30 percent. This LG display is also being claimed to possess superior resolution, brightness and contrast ratio, which means it can provide enhanced outdoor readability.

Describing the development as an ‘advancement for the high-end smartphone segment,’ Dr. Byeong-Koo Kim, who’s the VP and head of the company’s IT and Mobile Development Group, asserted that it will indeed open new doors for the mobile and tablet industry. It will however be a while before we see such a display being incorporated into an actual handset.