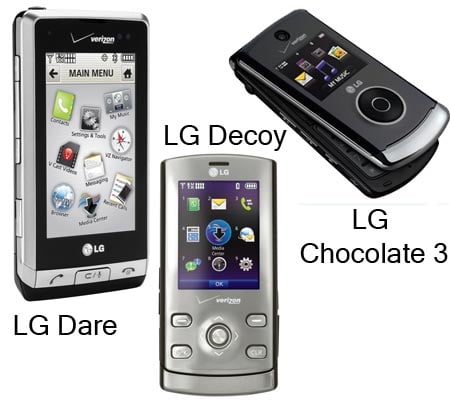 The LG Dare is a sleek and slim phone featuring all touchscreen operations. It is packed with multimedia functionality, 3G V CAST, V CAST Music and VZ Navigator. Its 3.2 megapixel camera makes capturing photos and videos easier. Also a photo editing tool is incorporated in the Dare so that users can make their photos more beautiful. Further users can upload edited photos on social networking sites directly from phone.

On the other hand the LG Decoy’s key feature is its hands-free headset that is integrated into the design. Headsets can be accommodated into the back of the device for easy transport and charging. A five-way directional joystick, V CAST Music and V CAST Video, Vand Z Navigator are amongst the key features of the Decoy. The slider phone is scheduled to be available on June 16 though Verizion Wireless.

The Chocolate 3 is a stylish slider phone and includes various functions such as a control wheel on the outside and an FM transmitter. Dual speakers, Bluetooth, MP3 player, 1 GB of internal memory are salient features of the phone. Besides, it supports microSD slot supporting 8 GB of memory. Further the Chocolate 3 is equipped with a 2.0 megapixel camera, V CAST Video and ESPN MVP.

“These summer phones join our other popular LG phones — the enV, the Voyager and the Venus– to offer our customers an array of applications, downloadable games, music and other content that is unparalleled in its variety and ability to enhance customers’ lifestyles,” said Mike Lanman, vice president and chief marketing officer for Verizon Wireless. “By unveiling these devices now, we are giving our customers the opportunity to choose the device that’s right for them, backed by the most reliable wireless network in the nation.”

The Dare and Chocolate 3 are expected to hit the market by July 2008.