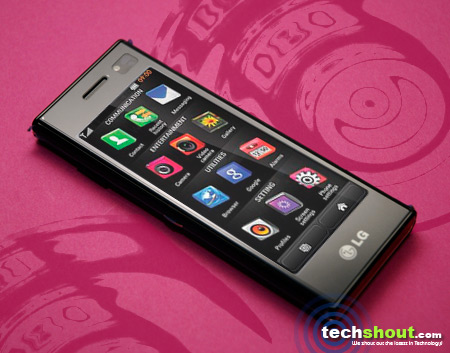 The very recent LG Chocolate BL40 kept us excited round the week with its wide feature set as we put it through our review. Having reached India in the last week of January 2010 to say we were mighty excited would just push down the enthusiasm. ‘Forget love, I’d rather fall in chocolate!’ While those on the Valentine trail will think otherwise, we might just want to agree with this quote after having literally dipped our feet deep in ‘Chocolate’. If ‘Chocolate’ gets your adrenaline rushing, then hop onto sweeter pastures and get a taste of the fashion-forward BL40 in our review.

For those not really upbeat on the LG Chocolate terrain, the new Chocolate BL40 is an addition to the company’s Black Label portfolio. Claiming to be the world’s first full cinematic screen mobile, the handset boasts of a plethora of advanced functions. Highlights among them are the 4” touchscreen, S Class UI, 5MP Autofocus camera, MP3 player, FM Radio and Flash support. Enabled with Bluetooth and Wi-Fi, the phone also lends support to GPS connectivity and 3G HSDPA 7.2MBPS networks. It also includes support for a number of languages while packing in complete email support including Microsoft Exchange.

The LG Chocolate BL40 phone arrived to us in a very neat red and black box syncing with the colors of the phone that said ‘Open Here’ just like a perfect gift. Besides the obvious phone, the package was minimalist comprising of a travel adapter with the accompanied USB cable, headphones with an additional set of ear plugs and the CD guide. If you are among those who love flaunting their gizmos while using them will instantly admire the very distinct look of the phone. The BL40 sports a chic fabrication that’s a bare minimum on the front. With a long touchscreen, it could actually be mistaken for a PMP. There are no keys though on the front and above the touchscreen is a speaker along with a front-facing camera. The topmost portion incorporates the 3.5mm headphone jack and a power on/off cum lock/unlock button. The left panel shows off a USB port with an LED light that is illuminated red when the USB cable is connected or when you charge the phone via the cable. Below the button is a dedicated music button that takes you straight to your music library, though you’ll have to push it really hard to do that.

The right panel on the top includes a sleek elongated volume up/down button which also helps adjust ringtones and the touchtone. The lower part of the right panel includes a dedicated camera button. All the buttons while fabricated in metal are neatly infused along the side edges. The glossy black phone further reveals a neat finishing while its top and bottom edges in plastic are painted red. The device appears sleek though we found it to be a bit too long. Ensuring you grab attention, it will take more than a glance to run through the chassis. Besides the phone is also bulky and could be really inconvenient to tag along in the pocket. It measures around 128 x 51 x 10.9 mm in dimensions and tips the scale at 129 g. As we switched the phone on after inserting the SIM card, it revealed an initializing database message. We were welcomed by the more than impressive S-class user interface that appeared to be intuitive. The interface is neatly organized into four sections mainly Communications, Entertainment, Utilities and Settings. There are relevant shortcuts in each menu of each function. With an accelerometer, the 4” touchscreen seemed impressive aligning the menu horizontally or vertically depending on how we handled the phone. On continuous usage we realized the touchscreen to be not as responsive as against what we had perceived. The phone reveals a QWERTY keypad when held horizontally and a regular alpha-numeric keypad in the vertical holding position. The interface seemed to take quite some time to switch between the horizontal and vertical holding positions. While the homescreen can be customized to 3 different settings, there’s also a special multitasking widget on the left corner of the homescreen that allows you to minimize applications. You can minimize a maximum of 3 applications simultaneously and its inclusion was pretty thoughtful. 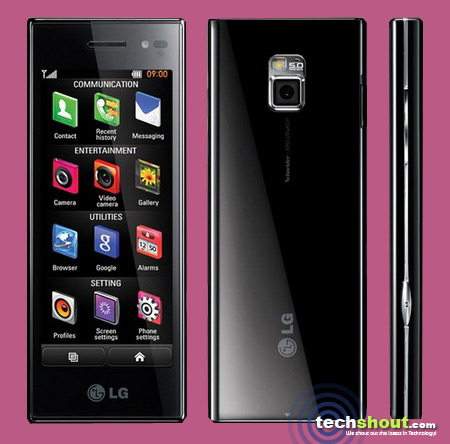 Though it wasn’t much of a hassle navigating through the menus, typing a message we must say was quite a task. If you are among those new to the touchscreen phone genre, you’ll wish for it to be simpler. The voice quality however was superior and we could engage in conversations that were loud and clear. On the connectivity front we browsed through the internet using Wi-Fi which was quick and seamless. The phone also allowed us to gain a UTMS connection minus any interruptions. Internet browsing includes the multi-windows option that allowed us to open many windows simultaneously. With Web pages appearing optimized to show content, just a simple touch and swipe of the fingers let us to toggle between windows. You can choose from a truckload of advanced settings that are available for easy browsing. These include adding bookmarks, multi-windows, history, re-setting zoom and more. What’s more you can make calls and browse the net without getting disconnected from the internet. Including a hands-free mode, Bluetooth connectivity too was quick. On connecting the USB cable, we could also transfer content seamlessly.

Equipped with a 5.0 megapixel camera we couldn’t wait to explore the imaging experience with this phone. The camera is enthusing and delivers some really good results of captured subjects. With Autofocus, it boasts of 5 scene modes namely Portrait, Landscape, Auto, Sport and Night. You can further opt to snap images with or without flash while also being able to adjust the light settings. Including zoom, Auto and Macro options, the Red Eye Reduction function further enhances the imaging experience. While you can choose to use the dedicated camera button on the panel, a simple touch on the right screen will also allow you to capture photos. The relevantly placed shortcut to the gallery enabled us to view images captured instantly. The LG Chocolate BL40 also wraps in a special video camera option that comprises of auto and night scene modes. Despite handshakes and disturbances, we were proffered superior video quality. With 3 recording modes namely Normal, MMS and DNLA, the video interface too includes a shortcut to the video gallery. The camera and settings are designed in a rotating wheel like tool. Simply spinning the tool with the touch of a finger let us choose the required settings. With practically all the features of a basic digital camera, the phone also packs in a front facing main VGA camera.

Incorporated with a dedicated Google tool, the LG Chocolate BL40 includes Google Maps, Google Search, Google Mail, YouTube and Blogger. The Entertainment menu includes attributes like music gallery, games, movie maker and more. While the reception of the FM radio was not that great and came with too much disturbance, the fun actually begins when you enter the Games and Apps function. The games section includes 3 demo games, Asphalt 4: Elite Racing, Brain Challenge Vol2 Stress Management and Bubble Bash trial version. Brain Challenge in particular was a demo brain enhancement program that requires users to quickly identify fractions, numbers and such, telling you if you’re fast or slow. Once you’re in the Games and Apps section it could be really difficult to get out of it. Yes, the very addictive feature bundles in a lot of fun stuff including a wide range of interesting games. Racing Time 2, Dual Match, Music World, Hidden Catch Wide and Bubble Breeze are among the interesting applications. The Bubble Breeze in particular we thought was real fun. It includes a special blowing function that lets you blow bubbles through the base of the phone literally into the screen and touch them to gain points. There’s also a fun musical instruments game onboard that let us play the piano and drum live with the touch of the fingers. With Wisepilot for LG, the phone also shows off a social networking tool that includes shortcut to Facebook, Twitter and MySpace.

The utilities section includes regular functions like an Organizer, Alarm Clock, Memo, Voice Recorder and more. The accompanied headset is fabricated with ear plugs that lodge deep in the ears. Besides offering advanced audio quality, it also shields against external noise to some extent. Additionally the 1GB memory and the option to expand it up to 32GB should suffice most needs. Among the quarters that had us complaining about the phone, the battery would certainly stand out. We charged the phone a couple of times in a single day on heavy usage. Despite a power saving mode which sets off the auto brightness of the screen to save power, we were disappointed with the poor battery.

The large screen makes the phone really great for watching videos and movies. Its high-resolution and lively appearance will leave you more than happy if you are a multimedia lover.

For users who tend to use more than one functionality on their phones, the multitasking option is really useful.

The combination of black, steel and red on the chassis along with its unique design will certainly make the phone stand out in the crowd.

Audiophiles will certainly enjoy their music thanks to the included headphones. Even without the headphones, the phone’s speakerphone is might impressive.

One feature missing we thought was that when setting up any function there are no confirmations that pop up.

Like most advanced touch phones, the battery left us truly disappointed.

While long usage of the LG Chocolate BL40 tends to heat it up, the interface shockingly froze quite a few times and that too when it only had one application running.

In addition to this, the touchscreen just refused to respond sometimes appearing really sluggish. It quite put our ‘touch’ skills to test! Like most touchscreens, the phone literally attracts dust and fingerprints besides the obvious smudges.

You might just refrain from carrying the phone in your pocket as the super long design renders it really inconvenient to do so.

The show-stopping LG Chocolate BL40 will keep you quite busy on long and boring trips. For those who love playing games and engaging in fun applications, the phone could be apt. While the Rs. 25,000 price tag and battery life could give you second thoughts, if you look at the larger picture it may hold your attention. On our part, we’d give the phone a good 8.5 out of 10.