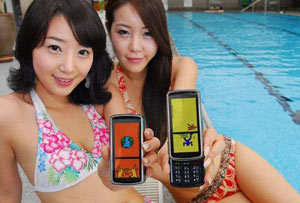 LG can play a humor game very well with a variety of names like LG Wine, LG Chocolate and the LG Ice-Cream. LG is now set to sizzle with the latest LG Bikini phone which features an interesting touchscreen display with the sleek LG style and charisma.

The phone eliminates the physical navigation keys with the Touch InteractPad which provides context-specific virtual keys to suit the user’s requirement. The InteractPad provides a much more convenient mode of interaction with the phone as the handset smartly reacts as per your needs and one need not by-heart the key function of the hardware.

The LG Bikini presents itself in style with its large and easy to use icons and keys which are given the right spacing so that people with big fingers can use it with ease. The phone also clicks off with a respectable 3MP camera, provides Bluetooth connectivity and to pump in that extra space the phone features an expandable memory slot.

The phone’s model number gets dubbed differently in each country which is LG-VX8800′ in the US Markets, LG-KF600 in the European zone and is known as Venus phone in the West. The LG Bikini phone makes a sale in the Korean market at a price ranging around 500,000 to 600,000 KRW which translates to $500 to $600 USD.