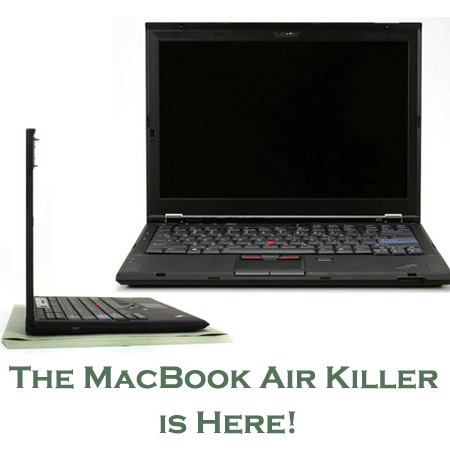 A little more than a month back, we had reported about Lenovo’s latest ThinkPad X300 that had leaked on the internet. Now things have got a little more official.

Lenovo has rolled out its highly-awaited super-slim ThinkPad X300 notebook, which is touted to be Apple’s recently launched MacBook Air’s keen rival.

The main features and specs of the Lenovo ThinkPad X300 notebook are:

Speaking about the new notebook, Tom Ribble, director of ThinkPad marketing said, “This is meant for our customers that value mobility, productivity and that want a notebook that is also going to be environmentally friendly and environmentally responsible.” Adding, “This is meant to be the thinnest and lightest full-function notebook in its class.”

On the other hand, Apple’s Macbook, which was unveiled at the 2008 Macworld Expo, measures 0.76 at its thickest point. But the areas where the ThinkPad scores over the MacBook are that firstly the former includes an optical drive, which the latter does not. Also Apple’s baby has a battery which cannot be replaced, which is not the case with the X300; and finally the MacBook incorporates only a single USB port as against the three USB ports that the ThinkPad includes. And of course, the MacBook does not incorporate a DVD writer.

Pricing for the Lenovo ThinkPad X300 begins at $2,799, for a system that comes without a DVD drive or the extra wireless options beyond Wi-Fi. According to the company, X300 should be available for sale right away through its online store as well as retail shops. However shipments from the online store will not begin instantly.