Lenovo’s making headlines at IFA 2016 with the all-new Yoga Book, a double screen tablet whose second display functions as a digital keyboard and sketch pad. The brand’s unique design could signal the beginning of the end for physical keyboards if it proves to be a success.

Although it looks like a laptop, Lenovo insists the Yoga Book is in fact a 2-in-1 tablet, going as far as to call it the thinnest and lightest hybrid device in the world. The star feature is of course its instant halo keyboard which the company claims adapts as you type, reducing the number of errors with in-built prediction, artificial learning software, continuous optimization, and haptic touch feedback. 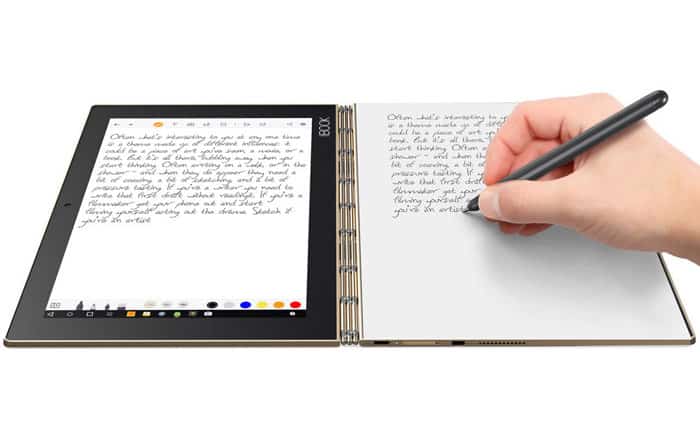 When not typing, users of the Yoga Book can utilize the second panel to jot down ideas or sketches via the brand’s Real-Pen. Unlike conventional styluses, the accessory can also hold bona fide ink tips. People just have to attach a piece of paper to the screen to start writing or drawing with actual ink. The tablet additionally saves everything they do digitally.

Being able to sketch on both a digital and paper surface may prove to be a boon to individuals who would like the freedom of getting to choose between both. Furthermore, Lenovo says the Real-Pen stylus doesn’t need batteries to power it and offers 2048 levels of pressure, in addition to 100-degree angle detection.

Take a look at the specs of the Lenovo Yoga Book at a glance:

The Lenovo Yoga Book also features the series’ signature watchband-style 360-degree hinge to bend itself into 4 different modes namely Browse, Watch, Create and Type. The tablet is priced at €499 for the Android model and €599 for the Windows one. It’ll be available globally starting in September and in the US by the end of October.