Lenovo has launched its first Windows 10 tablet called the ThinkPad 10 and the device is also amongst the few options on the market to come with the new Intel Cherry Trail processors. The slate is expected to go on sale this summer since that’s when the new Microsoft desktop OS will be officially released.

The Lenovo ThinkPad 10 is a pretty good upgrade over last year’s model and it’s also a great alternative to the Surface 3 from Microsoft. The slate is designed for business users and it comes with the ThinkPad Pen Pro stylus as well as the WRITEit software suite for a better pen experience.

Like last year’s model, the new Lenovo device offers a 10.1-inch 1920 x 1200 pixel LCD touch panel and it also has Gorilla Glass 3 protection. Additionally, it’ll be able to run desktop apps owing to the inclusion of the Intel Atom X5 Z8500 and X7 Z8700 processors which pack a huge speed bump over the Bay Trail chips. 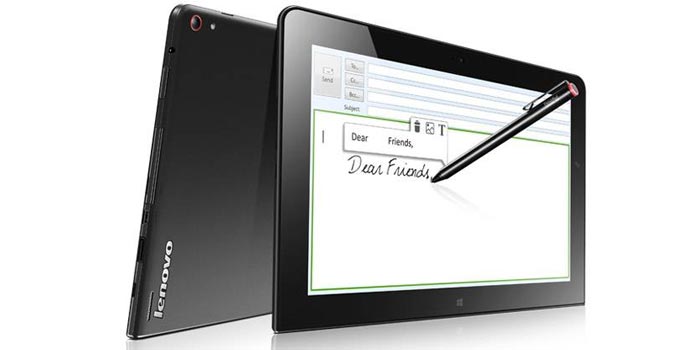 And the company isn’t holding back in the memory department either as there’s up to 4GB of RAM onboard along with 64GB or 128GB of SSD storage. Coming to connectivity, Wi-Fi ac, Bluetooth 4.0, HDMI and USB 3.0 support are all onboard. The best part is that you can opt for 3G or 4G LTE as well. The ThinkPad 10 promises up to 10 hours of battery life and it can be deployed as a notebook through the Ultrabook Keyboard or Folio Keyboard attachments.

The Lenovo ThinkPad 10 carries a price tag of $549 and up and you’ll have to shell out extra cash for any accessory including the aforementioned ones.