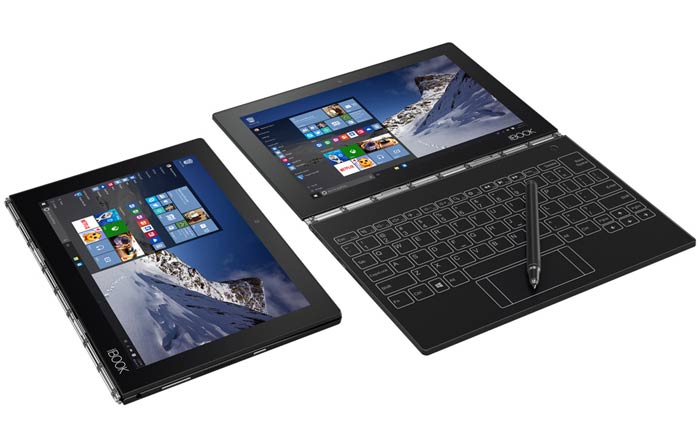 Lenovo’s brought its unique Yoga Book to India shores, a few months after the tablet-laptop hybrid made waves at IFA 2016. The device is a Flipkart-exclusive and can be pre-ordered right now.

The Yoga Book will set interested buyers back by Rs 49990. Lenovo claims it’s the thinnest 2-in-1 in the world. Its slim 9.6mm profile combined with its 690g weight should serve to increase its appeal among people seeking out a portable tablet with a couple of standout features to carry around.

Diving into some of those distinctive features, the Yoga Book does away with a separate physical keyboard in favor of a virtual Halo one. The touchscreen format allows the product to take advantage of AI software to learn a person’s typing habits and display predictions accordingly.

When not virtually clacking away, users can utilize the second screen as a sketch pad. They can either write or draw directly on the Create Pad or attach paper to it. The bundled Real Pen uses actual ink and does not need to be charged. Lenovo boasts that consumers will be able to view their creations or digitized notes in real time on the primary display.

Here’s a quick summary of the specifications of the Lenovo Yoga Book:

Once again, the Lenovo Yoga Book is currently up for grabs via Flipkart priced at Rs 49990. Only the Windows 10 model is being sold in India, with no word on whether the Android version will be making its way to the nation soon.