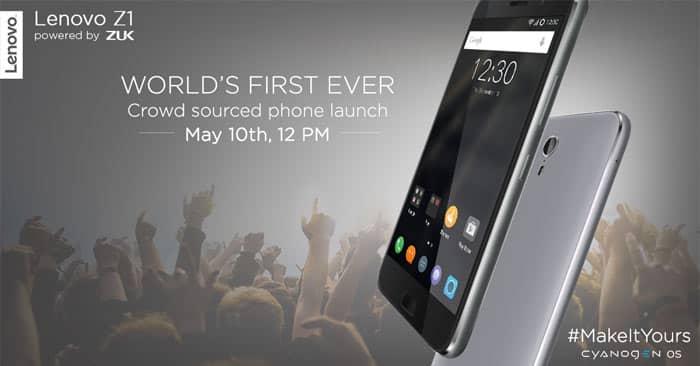 After having showcased it to the press a few days ago, Lenovo is now all set to officially launch its Z1 smartphone in India. May 10 is the date on which this shall happen, and that’s when we can expect to know its exact price.

If you’re out of the loop, this phone is actually the Zuk Z1 handset which was introduced last year in China, with Zuk as a sub-brand owned by Lenovo. Apart from a low price, its main selling point happens to be its incorporation of the Android-based Cyanogen OS.

This software used to enjoy exclusivity to Micromax’s Yu brand in India, which had also led to high-profile court battle involving OnePlus not too long ago. However, Lenovo has confirmed that this limitation has been taken down now.

Here’s a quick glance at the specs of the Lenovo Z1:

The roll out of the Lenovo Z1 is being referred to as the world’s first ever crowd sourced phone launch. The details on this are still to be made clear though. The firm has revealed that this phone will be called ‘Lenovo Z1 – powered by Zuk’ in India.

Also Read: Zuk Z1 gets a back panel that’s made from actual wood

This handset ships with the outdated yet strong 32-bit quad core Snapdragon 801 processor inside it. It also packs 3GB worth of RAM and 64GB of non-expandable storage space. Another one of its highlights is its incorporation of a 4100mAh battery.

Stay tuned until May 10 to know more about the Lenovo Z1 and its all-important price in India.