A little over 2 weeks back, Lenovo officially took the wraps off its new Yoga tablets which run on Android instead of Windows like other devices in the series. Both slates have now made their way into India and have gone up for pre-order through the company’s online store.

The Lenovo Yoga tablets come in two sizes, 10-inch and 8-inch. Both devices are entertainment focused and they sport a hybrid form factor which can be implemented in 3 different modes, namely hold, tilt and stand. The multi-mode design is made possible by the battery cylinder on the lower part and the integrated kickstand that’s located on the side. Design-wise, both slates flaunt the same stylish appearance and they measure just 3mm at the edges. 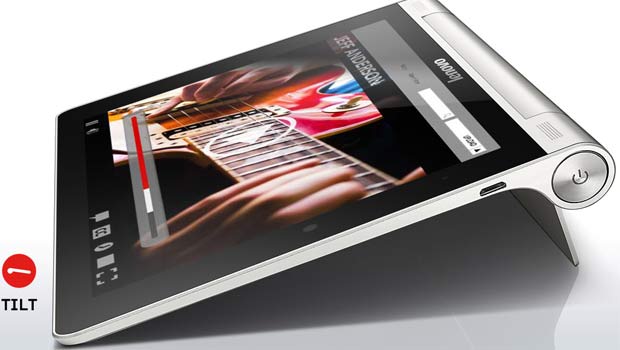 Also, there’s a laser-etched back panel that’s impervious to scratches, asserts the company. The activity time derivable on both tablets is estimated at up to 18 hours of web browsing. The 10-inch model sports a 9000mAh battery, while the 8-inch one carries one of 6000mAh capacity. Visuals are delivered through an HD display (1280 x 800 pixels) and there are dual front-facing speakers with Dolby Digital Plus for a rich audio experience.

Apart from these, both 10-inch and 8-inch Lenovo Yoga slate share other common features as well. They have dual cameras, a 5MP rear snapper and a 1.6MP webcam, 1GB of LP DDR2 RAM, a quad core 1.2GHz MT 8389 processor, 16GB of eMMC storage and Android 4.2 Jelly Bean. The company had introduced the slates in Wi-Fi and cellular choices, albeit only the latter options are being offered in India. Moreover, the 8-inch variant will also support voice calling according to the specs sheet.