Lenovo’s making its presence felt at the MWC 2017 with a slew of laptops and tablets set to hit stores starting from April. Among the new launches are the Miix 320, Tab 4 series, Yoga 720, and Yoga 520.

Starting off with the Yoga 720 and 520, the convertibles will be available in 13-inch, 14-inch, and 15-inch sizes. The biggest version of the former comes with an integrated fingerprint reader to unlock the device, 7th Gen Intel Core i7 processors, NVIDIA GeForce GTX 1050 discrete graphics, and Thunderbolt 3 support.

Lenovo claims the 15-inch Yoga 720 can last for 9 hours at a stretch. The 13-inch variant is apparently 17% thinner than before thanks to its 14.3mm thickness. As for the Yoga 520, the device has a lot in common with its sibling. However, its fingerprint scanner is an optional add-on. It also boasts of a longer 10 hour battery life.

Moving on to the Miix 320, the detachable 2-in-1 runs on Windows 10 and is bundled with a full keyboard. It boasts of specs like a 10.1-inch 1080p display, optional LTE support, and 10-hour battery life. The tablet itself weighs in at 550g, enhancing its appeal among people who are seeking a lightweight gadget to carry around. 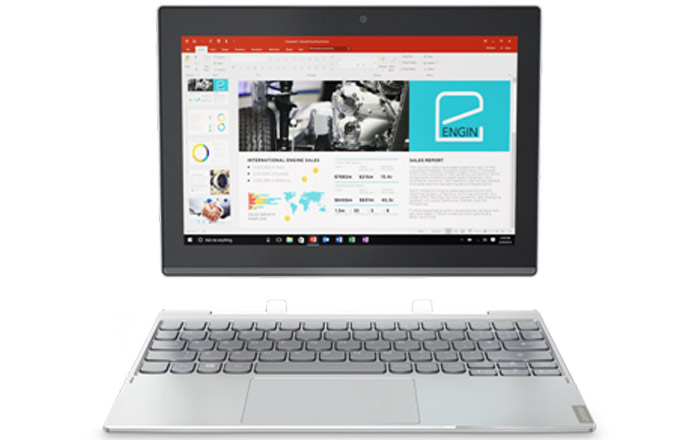 Finally, the latest Tab 4 series is composed of 4 new tablets namely the Tab 4 8, Tab 4 10, Tab 4 8 Plus, and Tab 4 10 Plus. The first two offer dual speakers and Dolby Atmos technology, while the latter two are meant for media buffs who want a slate with FHD screens and 12 hours of battery life.

Lenovo’s also selling optional packs which transform any member of the Tab 4 series into a kid’s or productivity-focused tablet. The first serves up things like a shock-resistant bumper and scratch-resistant 3M stickers and the second includes a Bluetooth keyboard.