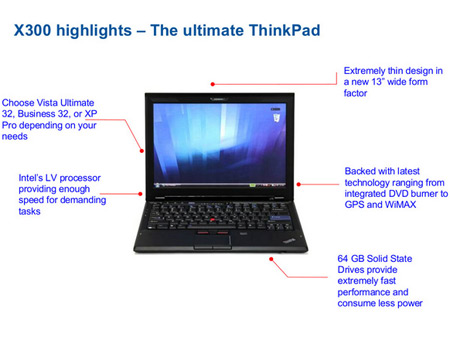 Guess what’s leaked this time around? No, there isn’t any water leaking from Mrs. Smith’s bathroom onto your newly furbished bathroom ceiling! Well, it’s the latest leaked Lenovo notebook, which is doing the rounds of the internet lately.

Reportedly, ThinkPad X300 is the name of Lenovo’s new entrée in the notebook market. Though no details about its price and availability have been revealed yet, the one thing that’s coming out most clearly is its uncanny similarity in terms of size and weight with the latest MacBook Air. This clearly implies that the Lenovo ThinkPad X300 is super thin and lightweight.

Furthermore, it could also feature various connectivity options such as Wi-Fi, WiMax and Bluetooth. Additionally the X300 weighs only 2.5 pounds, making it half a pound lighter than the Air.