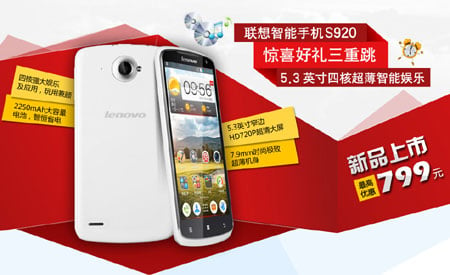 A price for the Lenovo S920 has become official and the device is headed to China with a definite release date in tow. It was only a short while ago that the handset was leaked and now it has found a spot on the company’s website for the region.

And while the device doesn’t constitute something really high-end, it slots into a mid-range segment quite well, in terms of the specs it’s supposed to tag along. According to Android Authority, GSM Insider – a website that had the device labeled with Ideaphone badging – is reporting that the gadget has been officially announced and will be the first smartphone under the Lenovo brand to come with the latest Android platform (version 4.2).

In fact, this is probably the only aspect of the device which can really excite potential buyers. Most of its other (known) features fall squarely at a very average level by today’s high standards of large, full HD displays, tons of processing power and great photography hardware and software. Such is the case with the likes of the Galaxy S4, the Oppo Find 5 and others. 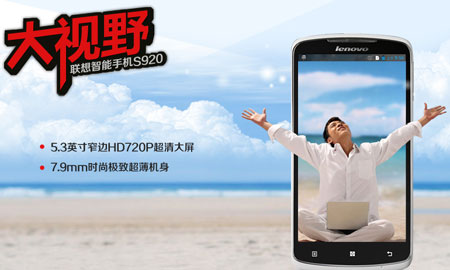 Getting right into the phone’s abilities, we see that it comes with a 1.2GHz quad core MediaTek MT6589 processor, which should prove capable in its own right. There’s 1GB of RAM to help things along, although internal memory stats are not known at present. A 5.3-inch display that can put out visuals in a resolution of 1280 x 720 pixels should be sufficient, and those who yearn for 1080p should look elsewhere.

It is expected there will be an 8MP camera on the back, exact details of which are still in the dark. On the front, users will have a 2MP webcam, presumably for video conferencing, although the full spectrum of connectivity options that will come along for the ride is not known. However, the handset will have a 2,250mAh battery and will be just 7.9 millimeters thick.

The Lenovo S920 is expected to go up for pre-order on April 1, with a release apparently scheduled for April 8, 2013. It will sell for 2199 Chinese Yuan, which comes to approximately $354 (US). This is by no means cheap for a mid-range device.