Lenovo K920 launch date set for August 5, here’s what to expect from the new flagship

The Lenovo K920 which is likely to be called the Vibe Z Pro, has received an official launch date of August 5. This handset will be unveiled in China on the said date, but we already know an awful lot about it to be excited for curtain raiser.

Leaks have been one source of information, but Lenovo itself has been showcasing the device at various events for some reason. It’s hence that we know of its specifications which are being highlighted by a 6-inch 2K display bearing a resolution of 2560 x 1440 pixels. 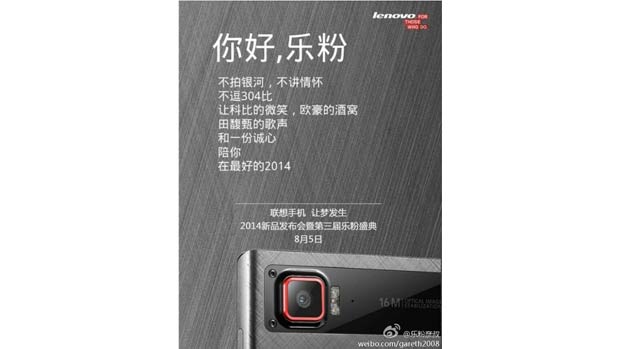 The Lenovo K920 is most likely to ship with 32GB of storage onboard, but there’s still no clarity on whether it will feature a microSD card slot or not. Details about its August 5 launch have come through the company’s marketing general manager who has uploaded a teaser image (spotted by G4Games) through his Weibo account.

This picture reveals that a 16MP main camera will rest on the rear surface of the K920. Moreover, a 5MP front snapper will also form part of its offerings, apart from 3GB of RAM and a Qualcomm Snapdragon 801 chipset.

Here’s a brief look at the specs of the Lenovo K920:

With these high-end components onboard, the Lenovo K920 looks ready to challenge bigwigs from the league. We’ll have to wait until August 5 however to see what kind of pricing its maker applies to it.