Lenovo reportedly has a high-end smartphone dubbed K7T Kingdom in the offing and the leaked benchmark results give away the juicy details of the device before the company gets a chance to introduce it officially. We are expecting the phone to make its debut at the MWC 2014, slated to be held next month.

According to the screenshot of the results that has surfaced on the internet, the Lenovo phone rocks a quad core Qualcomm Snapdragon 800 chipset and can clock in a maximum speed of up to 2.2GHz. And to assist the SoC, the company has decided to toss in 3GB of RAM as well. Speaking of memory, its total onboard storage may amount to 16GB and it should have a microSD card for expanding it further. 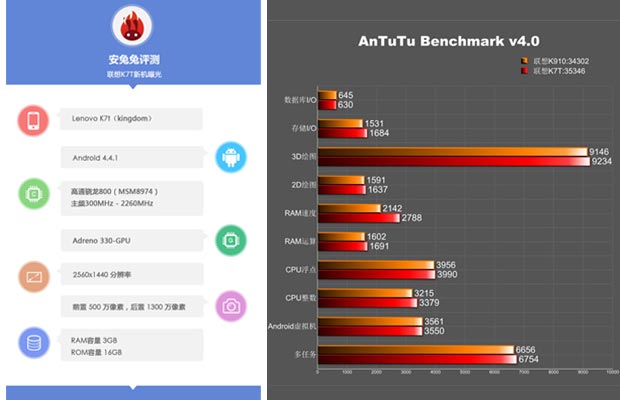 And what’s more, the Lenovo K7T has an Adreno 330 graphics processor and an intuitive interface is likely to be present, thanks to the Android KitKat 4.4.1 OS. Its touchscreen apparently has 2K resolution of 2560 x 1440 and needless to say, the phone will sport dual cameras. The front snapper has a 5MP lens, while the rear-facing shooter boasts of a 13MP one.

The guys over at GizChina were one of the first to spot the K7T Kingdom smartphone’s benchmark results on AnTuTu. And as the website reports, the upcoming handset can give some tough competition to the likes of the Vivo XPlay 3S, Oppo Find 7 and OnePlus One amongst others.