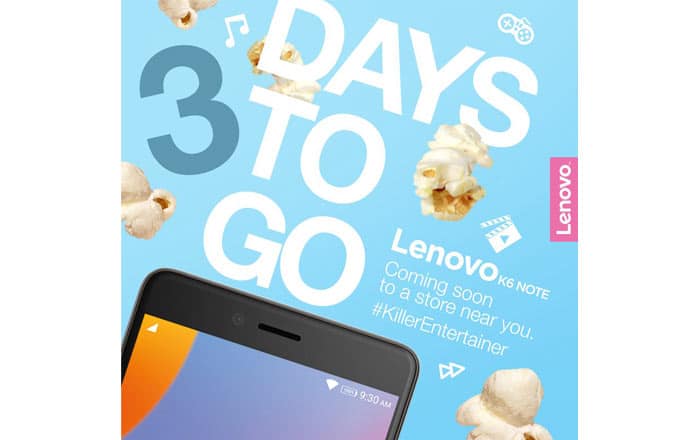 Lenovo’s planning to launch the K6 Note in India on December 14, just 2 weeks after it had brought the K6 Power to the country. The brand made the phone’s imminent arrival official via its local Twitter handle.

The post features an image which simply states 3 days to go for the Lenovo K6 Note. It also confirms that the handset is coming soon to stores, suggesting that it’ll be sold via offline outlets. To recap, the phone made its debut alongside the K6 and K6 Power during the IFA 2016.

The K6 Note is the latest member of the brand’s popular Note series which offer solid mid-range specs at budget rates. There’s no word on the new device’s price tag yet, though it will likely continue its predecessors low-cost tradition.

As for specs, the K6 Note comes in two variants namely a 3GB and 4GB one. A 16MP rear camera takes care of photography and is accompanied by a dual-tone LED flash unit. It derives its power from a 4000mAh battery and gets by on a 1.4GHz octa-core Snapdragon 430 processor.

Here’s a quick overview of the main specifications of the Lenovo K6 Note:

Stay tuned for the K6 Note’s cost and availability details the moment Lenovo makes it official in India.