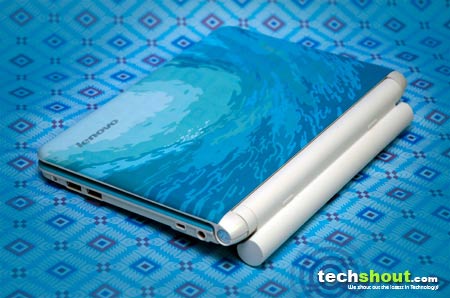 There was a time when netbooks were on the receiving end of flippant comments describing them as nothing but more compact, inexpensive and less powerful versions of laptops. Apple’s now-extinct eMate 300 NC with 1MB DRAM, 8MB ROM and grayscale display is thought to be the original idea behind netbooks. As technology progressed enough to allow these petite devices to pack in a punch almost equal to that of regular notebooks at affordable price points, the netbook came into its own. Oh, and the current recession is cited to have a hand in the increasing customer interest in these portable devices too.

The netbook market may be saturated with offerings, but few manage to really grab our attention. The last netbook we really appreciated was MSI’s Wind U130. Lenovo figures among the reputable players in the market with a number of well known offerings in the IdeaPad U and S series of UMPCs. When they released the IdeaPad S10-2 netbook, we just needed to check out how much more interesting this sequel to the S10 could get. The technical specifications did not seem to vary too much from the previously launched model, so we were left wondering if this newer version was just a design overhaul. Nothing but a hands-on review could sate our curiosity.

We got our hands on a designer cover Lenovo IdeaPad S10-2 netbook for reviewing. A cursory glance at the netbook’s exterior is quite pleasant on the eyes, but travel a bit further towards the rear end and its protruding battery causes a bit of an eyesore. The cool blue sea wave design on the lid is pleasantly glossy and currently covered with fingerprints – symptoms of a thorough review and proof that nothing we’ve laid our hands upon so far is actually fingerprint-resistant. Lenovo offers these netbooks in pink, black, grey, white or a choice of designer covers. The chassis is slimmer than its predecessor’s by around 4mm and more rounded. A suspicion at the back of our minds hints that this update is more of a design overhaul than anything else.

Any grouse that people may have had with the keyboard has been remedied well with the new one which is as comfortable as it can get on your regular netbook. There’s an enlarged right-shift key and touchpad and relatively less cramped spacing between the keys. The display too has been upgraded to a 10.1” WSGVA screen which delivers resolutions of 1024 x 600p driven by the Intel GMA 950. The bezel has a 1.3MP camera fitted along its top edge, where else can you expect to find it? With this webcam, users can avail of video calling and log into the system courtesy of Lenovo’s VeriFace software that comes bundled with the Lenovo IdeaPad S10-2. Owners have been extended the option of adding additional guest users to their device via a separate password protected account. 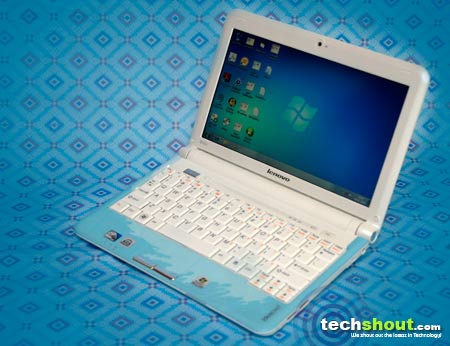 Our virtual dissection of the device reveals the lack of an ExpressCard slot and 1GB of DDR2 memory as also a 1.60GHz Intel Atom N270 processor, the latter two of which cannot be counted as an improvement over the S10. Users might want take a tip from other owners and implement 2GB RAM to get a bit more speed in the processing department. As for the missing ExpressCard slot, those who can’t live without one on their netbook ought to be looking for another such device. In order to assure us that this is an upgraded model indeed, the company has thrown in an extra USB port bringing their number up to three, Lenovo QuickStart, OneKey Rescue System, optional 3G, and enhanced Dolby sound. We’ll tell you why the last mentioned feature does not hold us spellbound in just a minute.

Meanwhile, the HDD can be customized to offer 160GB or 250GB storage capacities. While trying to set the Garfield wallpaper we discovered that purchasing the S10-2 with Microsoft’s Windows 7 Starter edition does not let you do so. Amusingly enough a couple of users who purchased it through Amazon claimed to be highly disappointed at this drawback, with one of them swearing to return it too. Users may also choose to order the gizmo with or without Bluetooth and a 3-cell or 6-cell Li-ion battery. Being wise in the ways of 3-cell batteries that die out on us before a reasonable amount of time passes, we’d advise the 6-cell one. It rendered around 5 hours of life after a lot of YouTube videos, gaming and various applications were run on it. Point to be noted, it doesn’t take more than half an hour before the device gets well-heated, especially around the touchpad area. It could do with better ventilation we’re guessing.

Getting back to the S10-2’s audio system, there are two Dolby speakers fitted into the front base of its chassis and headphone/mic input jacks to its left. The otherwise mellow-sounding cello strains of Apocalyptica playing Bittersweet were hard to catch and Life Burns by the said band sounded shrilly displeasing. We attempted to catch the tones better by plugging in a pair of headphones into the provided jack. It didn’t really deliver significant aural relief as compared to the in-built speakers. So the Dolby headphone and quality speakers that are advertised by Lenovo are not something to cheer about. This is not a netbook for those who like to carry their music and videos around on their portable PCs.

It stands on six feet-like protrusions which could probably keep the speakers from coming into contact with the surface on which it is placed. Don’t see how this is going to help if they’re muffled against a cushy surface though. Sure, the display visuals are pretty likeable but the accompanying sound quality sort of takes the sunshine away from that feature. Especially if you were attempting to watch a lot of YouTube videos like we did. No complaints from these quarters about the netbook’s web browsing capability which is impeccably smooth and speedy. The enhanced keyboard design ensured that our gaming experience on this gizmo didn’t suffer in the least bit though the viewing angle needs some time before one gets used to it. You’ll find that we’ve covered most of the FAQs that crop up when one is mulling over the purchase of a new netbook. Apart from that, there’s isn’t much to talk about while describing the S10-2.

Weighing in at around 1kg and sporting a sleeker chassis than its predecessor, the S10-2 delivers a performance that is at par with other well-known brands.

Apart from that its lowered price point is equally attractive for those wishing to purchase a netbook that serves basic user needs.

The sound quality comes foremost to our minds while ticking off the aspects that didn’t seem up to scratch.

Next comes the lack of an ExpressCard slot followed by the 1GB DDR2 SDRAM.

Finally, we round it off with the protruding battery.

The Lenovo IdeaPad S10-2 comes with a price tag of $330. On the whole, we might call this gizmo a bit boring. Just your regular netbook and why should it be anything but such? Rhetorical question that needs no answering. We’re giving it a 7.5 out of 10.