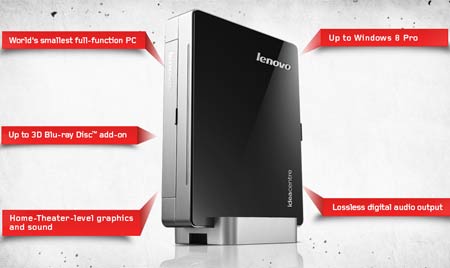 The price and release date details for the Lenovo IdeaCentre Q190 and the company’s latest lineup of C-Series AIO PCs have been divulged. Both the desktop and AIO range is expected to hit availability status starting next year bearing affordable retail tags.

The IdeaCentre Q190 is said to be the slimmest full-functional desktop PC. Compared to the 3.6-inch thickness of the world’s thinnest gaming rig, the Digital Storm Bolt, this system measures 0.86 inches wide packing in a decent set of specifications. The latter PC falls in the high-end category, while the computer in question caters to the affordable segment. Based on the details provided by the company, it can be equipped with up to a second generation Core i3 processor. 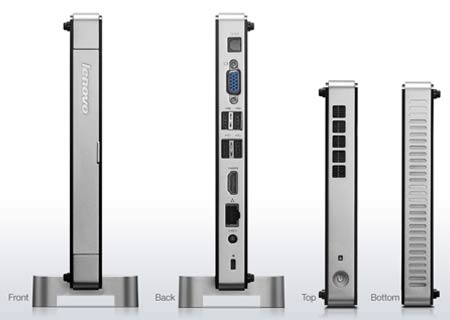 Powering up this machine is the Windows 8 Pro platform. Potential buyers will be able to configure it with up to 1TB of HDD storage for hoarding content and 24GB of SSD capacity as well as a total of 8GB DDR3 system memory. There is a host of other features thrown in as well. They include full HD graphics, an optional Blu-ray drive and 7.1 channel surround sound. The C-Series AIOs can be equipped with options from the Intel Core i3 processor lineup clubbed together with Nvidia graphics or an AMD E2 dual core CPU with AMD Radeon HD Graphics. Hardware components vary based on different PC models. 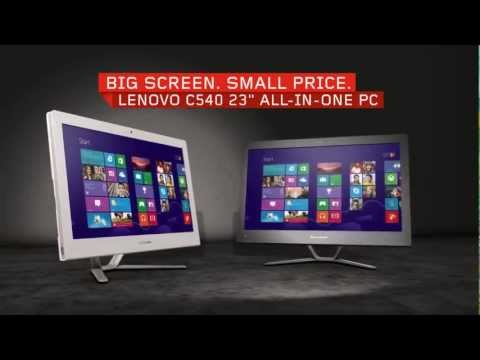 The Lenovo IdeaCentre Q190 will be up for purchase starting at $349. Where the AIOs are concerned, the C340 carries an initial cost of $499 and the C440 should retail for $519 and up. The C345 will carry a $479 starting tag, while the C445 and the C540 base models are said to cost $499 and $549, respectively. All aforementioned devices are expected to hit availability status in January 2013 and they will be up for grabs through the company’s business partners and its online store. 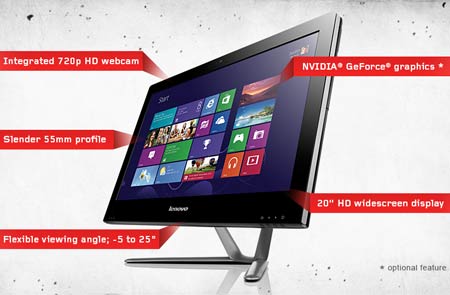 General specifications for C-Series AIOs are as follows: