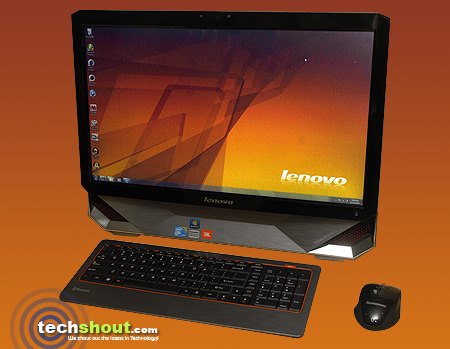 Over the years, we have witnessed an increase in the number of all-in-ones that are paving their way into markets. Striking off cable clutter, these AIO products put across a space saving solution. With the likes of Dell, Apple, Lenovo, Gateway and others exploring this space to the fullest, AIOs are no more a category unnoticed or untouched by consumers. One of Lenovo’s latest entrant in this zone of tech realm is the ideacentre B500 AIO desktop. The sturdy device barged into our review labs for an in-depth analysis. Read on to know how it fared.

At the look of it, the device seems quite rugged, posing smart and sophisticated looks. The looks are highly distinguishable while Lenovo ensures that its rear is presentable as well. The huge carton carrying the device is spacious enough for the various accompaniments like Bluetooth mouse and keyboard, IR remote, batteries, IR receiver, Information and Warranty booklets, Lenovo Win7 Drivers Pack and a few handy cables. The screen is bright at 23-inches and stands on an elegant base which is a mix of plastic and metallic finishes with a major part below the screen taken over by aluminum.

The aluminum has been fashioned like and unfolded cube with its flaps slightly inclined inwards. The aluminum further brightens the desk with the light it reflects received from the source just attached to the base of the screen bezel. Flanked on both sides of aluminum are the all metallic black grilles which further give a view of the speaker grilles drenched in orange. The plastic bezel carries the innovative touch buttons, a feature worth appreciating. These touch buttons sit on the bottom right side of the bezel. The row of touch buttons includes the lamp button, volume controls, brightness controls and the screen power button.

As aforementioned, the rear side of the Lenovo B500 has been well designed. The distinguishable chassis takes the similar form of an unfolded cube but inclined outwards. The chassis looks quite huge at it calmly rests on the back of the screen. However, it is fixed lower on the back of screen, leaving some space which has been etched with smaller of those cube-kind patterns. This glossy black patterned portion has been aesthetically designed. The device is supported by a flexible (limited flexibility) stand. This stand is dipped in grey shade, which is also the color scheme adopted by most of the back surface. The striking orange has been included on the backside covering the vents that are outfitted at the centre and also on top.

The edges on both sides aren’t the usual enclosed in a single sheath. The bezel shows off black color while the gray components box is visually distinguished. Apart from the scribblings from Lenovo, the backside leaves space for some ports while the rest are embedded on the sides. The rear of the Lenovo ideacentre B500 has been outfitted with four USB ports, Ethernet jack, AV-in connector, PS/2 keyboard connector, power connector and it was a delight to see the TV tuner. The right view of the AIO displays a power button and a DVD loading tray runs just below it. The left side shows off two USB ports, card reader, and headphone and microphone connectors. 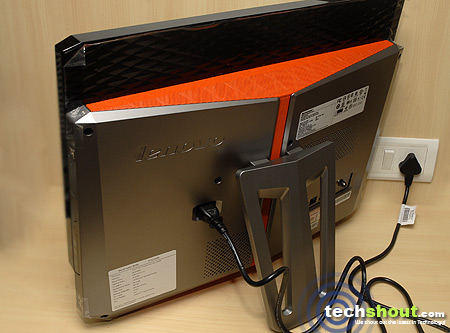 The loading tray is the only part of the device that looks fragile and at a point seemed as though we could split it into two parts. We wonder why Lenovo didn’t decide to integrate a loading slot instead. However, overall the device looks rugged including the hinge on its backside. The hinge is robust enough to carry the entire device but as mentioned earlier do not expect utmost flexibility. The viewing angles can be adjusted using this hinge, which fails at efficiency due to restricted movement.

The included peripherals deliver a rejuvenated look. Lenovo has almost struck the right chords with its design and the set of peripherals haven’t escaped this touch either. Remember the orange color that we mentioned painting the back and speakers? Well, the keyboard comes with such an orange rim while the mouse features an orange scroll wheel. The keyboard is all brushed gray to complement the aluminum look of the device while the mouse takes on the glossy black at the top surface and rubber on the sides. This ensured a great grip but overall mousing around wasn’t great.

The keyboard on the other hand equips soft keys with extended palm rest space and can be elevated to match your typing angle. Besides the looks, the Bluetooth enabled mouse and keyboard completely complemented the device design-wise. They formed a great peripheral set altogether. However, connecting them using Bluetooth was a task to some extent. We paired the mouse in two or three attempts but the keyboard took much longer.

The 23-inch display with 1920 x 1080 resolution is bright enough and can be turned on/off with the touch of a button. Complementing the viewing experience is the audio quality delivered by the device. The infused JBL speakers do their job well, be it music, movies or games. The sound is loud enough to fill a room and also crisp and clear. The inclusion of the speakers is worth appreciating.

The Lenovo ideacentre B500 is fuelled with the 2.66GHz Intel Core 2 Quad Q8400 processor and 4GB RAM. It runs on Windows 7 Home Premium while comes integrated with a 640GB HDD. It would be great if the company had outfitted the device with an HDMI port. Also, goes missing is the support for eSATA. The incorporated ATI Radeon HD 5450 does its job well. Though not a hardcore gamer, we tried our hands at a couple of games like Age of Empires 2, GTA and Bookworm and the graphics seemed quite vivid. Overall, the device definitely packs in some great gaming experience. However, we would recommend users to opt for a different mouse. 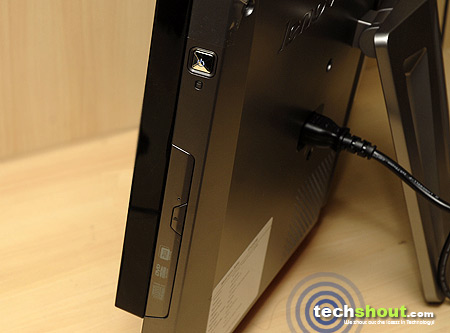 We liked the inclusion of the media centre remote. The included remote control seems a distinguished feature which went amiss in the previous couple of AIOs that we came across. Well, some Lenovo ideacentre B500 units ship with an IR remote while select come with the Bluetooth enabled one. Our unit packaged an IR remote with an IR receiver. Connecting it to the receiver was simple, putting aside the hassles of connection via Bluetooth. Once connected, the remote control takes you to the Windows Media center. It enables to play games just like one would indulge in the Nintendo Wii. However, do not expect a similar precision. Using it even otherwise, didn’t bring us perfect accuracy or precision.

The Lenovo B500’s software and hardware set helps deliver an efficient performance level. It can be considered as a fairly decent gaming device.

It poses in a striking design with bold orange accentuates. The stylish design elements are evidently visible even on the rear of the machine.

Beside good looks, the machine came across pretty sturdy.

The inclusion of the multifunction remote control is appreciable.

The chassis gets really hot at times.

It does not include HDMI support.

Joining the most recent bandwagon of All-in-One Desktop’s, the ideacentre B500 could be set apart with its sturdy and distinguished looks. We did like the performance delivered by the Lenovo machine and it could also satiate casual gamers. However, the peripheral connections and some other aspects do come as hindrance. However, those willing to overshadow these glitches can grab the Lenovo ideacentre B500 AIO for Rs. 56,290. This Lenovo device has managed to impress us enough to gain a rating of an 8 on 10.