Lenovo’s Yoga series of 11-inch, 12-inch and 13-inch convertibles running Windows has been quite successful and now, the company is extending the lineup with new additions which runs on the Android platform. While the earlier models were essentially laptops, the new ones feature a tablet form factor with a multimode design.

The Yoga slates are fitted with a cylindrical handle which enables three different modes. Hold mode makes it convenient to use in hand, while stand mode is made possible by rotating the handle by 90 degrees. The main purpose of the tilt position is to deliver an intuitive way of playing games and typing on the touchscreen. The cylindrical handle also helps enhance the activity life. 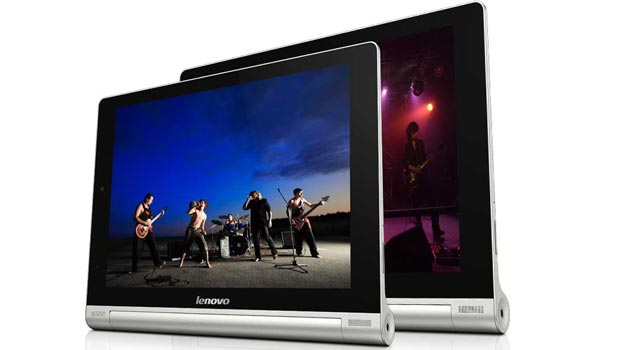 The company has fitted it with dual batteries that can deliver up to 18 hours of usage. Also, they can be used to charge other devices. The Yoga tablet will be available in 10-inch and 8-inch models, both running Android 4.2 Jelly Bean. The Wi-Fi only variants feature a 1.5GHz quad core MT8125 processor, while the 3G versions have a MT8389 SOC with four cores. The slate will be offered with 16GB or 32GB storage options.

To complement the 1280 x 800p HD panel on both models, Lenovo has thrown in front-facing stereo speakers with Dolby audio. The 10-inch model weighs 1.35 pounds and can be picked up with an optional Bluetooth keyboard that also acts as a cover, while the 8-inch option tips the scales at 0.88 pounds. Other common features of both devices include a 5MP auto focus rear camera, a front webcam and a microSD card slot supporting up to 64GB.

The 8-inch Yoga tablet is priced at $249, while the 10-inch one can be picked up for $299. Both devices will be available starting today.